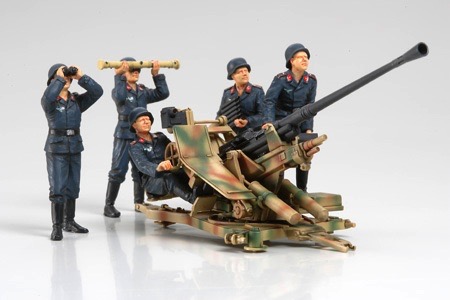 DISCONTINUED This product has been discontinued
and is no longer available.List price: $34.00
You pay: $23.29
(All prices in U.S. Dollars)

First released in 1989, Tamiya's mechanically detailed 1/35 3.7cm Flak 37 became a very popular item and often appeared in dioramas as a supporting piece. Fans have long awaited the release of this kit with anti-aircraft crew figures, and a collaboration with ICM has made this possible. A diorama depicting the crew shooting at a low flying approaching fighter aircraft can now be accurately portrayed with this set. The set features excellently proportioned figures with sharp details.