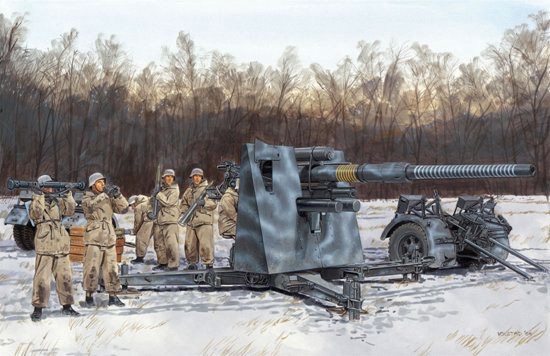 DISCONTINUED This product has been discontinued
and is no longer available.List price: $83.98
You pay: $56.59
(All prices in U.S. Dollars)

The formidable and legendary German "88" was originally designed as an antiaircraft weapon. However, such was its potency that it was quickly employed in the anti-tank role as well. Now we have here one primary weapon but in two variants, and Dragon has rolled them into one box in its latest 2-in-1 kit. This 1/35 scale 2-in-1 kit allows modelers to build either the FlaK 36 or the FlaK 37. These 88mm weapons have previously been available as separate kits, but now they come combined in a single box. All the necessary parts are included to build either version of the gun. Dragon's 88mm kits have always been popular, and now this 2-in-1 kit offering adds even further to the weapon's versatility.