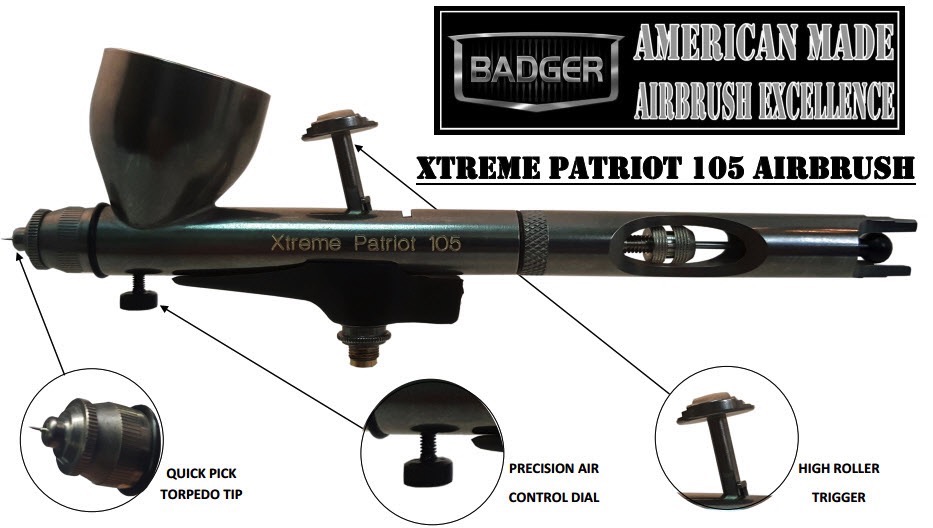 Manufacturer: Badger Air Brush
Stock Number: BAD 105XTR
View all products of type "Double Action"
View all products of type "Internal Mix"
Badger hasn't re-invented the airbrush, but suffice it to say they've most certainly raising the bar of airbrush function, performance, and versatility. Badger's new airbrush represents a level of airbrush excellence never before reached. In the words of one of the artists consulted with during the design of this new airbrush (after his initial testing session): "Using this airbrush is what it'd be like driving a luxury muscle sports car, if such a thing exists. It does everything. It even sprays white really well, smoothly! I've never had an airbrush spray white really well for a long session like this airbrush did. No other airbrush does that."

So what's new and different about the Xtreme Patriot 105? The easier question is besides its being a dual action, internal mix, gravity feed airbrush - what isn't new? Nonetheless here are some details on the new Xtreme Patriot 105 airbrush: All the foregoing useful new features of the Xtreme Patriot 105 aside, perhaps the most exciting thing about this new airbrush may be the design and performance versatility of its needle/nozzle...... The Xtreme Patriot has a stainless steel needle with an elongated linear air flow design, which enables microscopic atomization (micro-dots). But it also has a reasonably robust .3 nozzle tip that enables incredibly smooth spraying of even the most difficult of media color, WHITE! Whether acrylic, enamel, lacquer, urethane - it doesn't matter - this airbrush sprays white better, smoother, and easier than any other airbrush! And any airbrush artist can tell you there is nothing more difficult to spray with an airbrush than white - especially in detail applications. The finer elongated linear air flow angle of the Xtreme's needle in concert with the Xtreme's .3 aperture nozzle facilitate what maybe the most versatile spray pattern range of any airbrush on the market. The produced micro-dots, resulting from the elongated linear airflow angle, coupled with the "robust" media friendly .3 nozzle aperture allow the Xtreme Patriot 105 to produce legitimate hair line patterns to dense 2.5" wide spray patterns. This means artists, whether needing micro-detail or general coverage, may now be able to do both proficiently with just one airbrush. The Xtreme Patriot 105 is more than likely to meet their need as well as, if not better than, switching between a micro-detail and general purpose airbrush. Almost any capable artists will tell you that'd be amazing, and enormously time saving.

Badger Air-Brush Co. is Xtremely pleased to bring an airbrush of such incredible performance capability to airbrush artists. Whether you're the most accomplished custom painter, a museum quality fine scale model artist, a world champion taxidermist, or an aspiring artist - seeking an airbrush that will enable airbrushing success as you learn the craft of airbrushing (and long after) - we believe you will find the Xtreme Patriot 105 to be your airbrush of choice pretty much as soon as you start using it.

If you truly want to know what using the most advanced and versatile airbrush is like, below is a listing of some the online sellers from whom you can currently purchase the Xtreme Patriot 105.

As always Badger Air-Brush Co. thanks you for your confidence in and usage of our American Made Airbrush Excellence products.