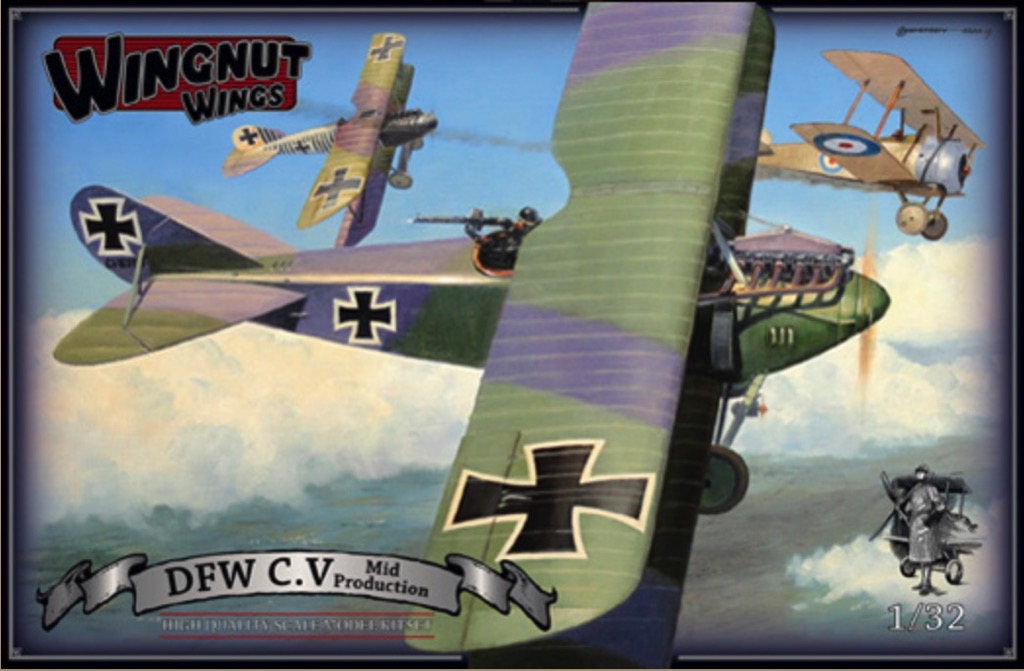 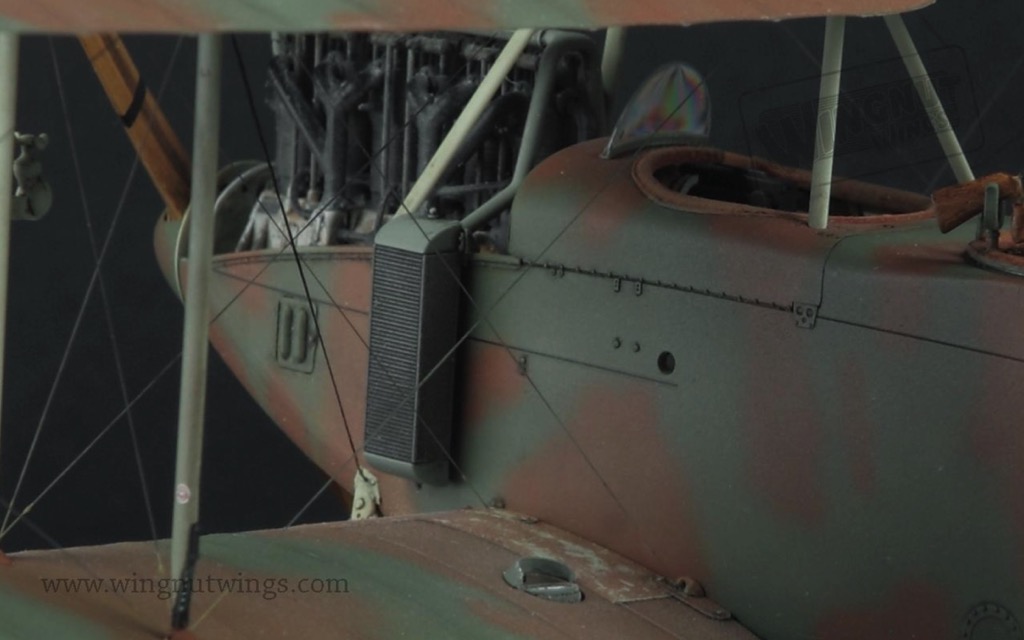 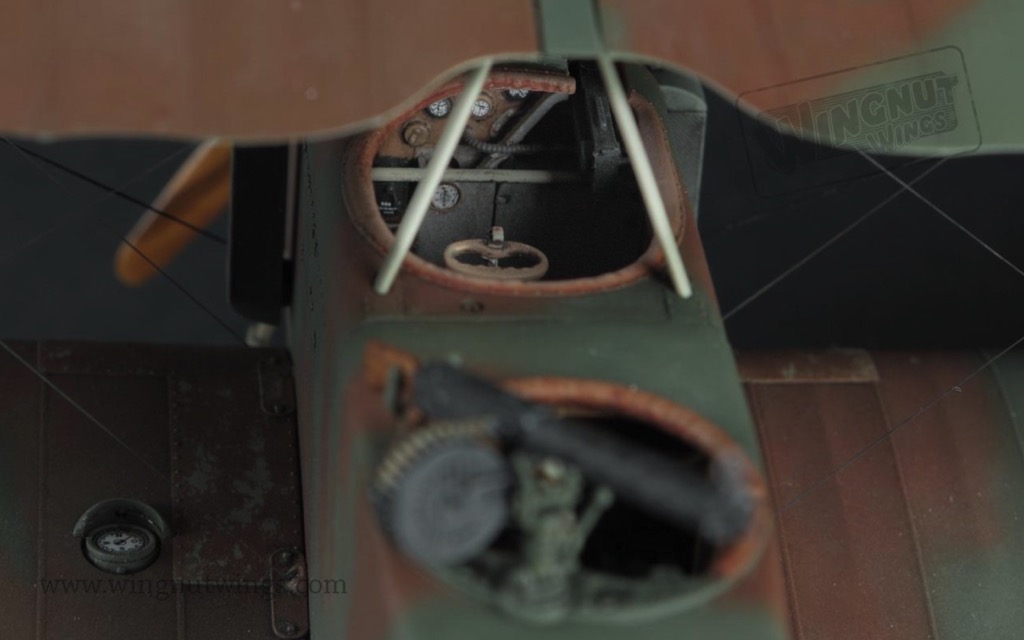 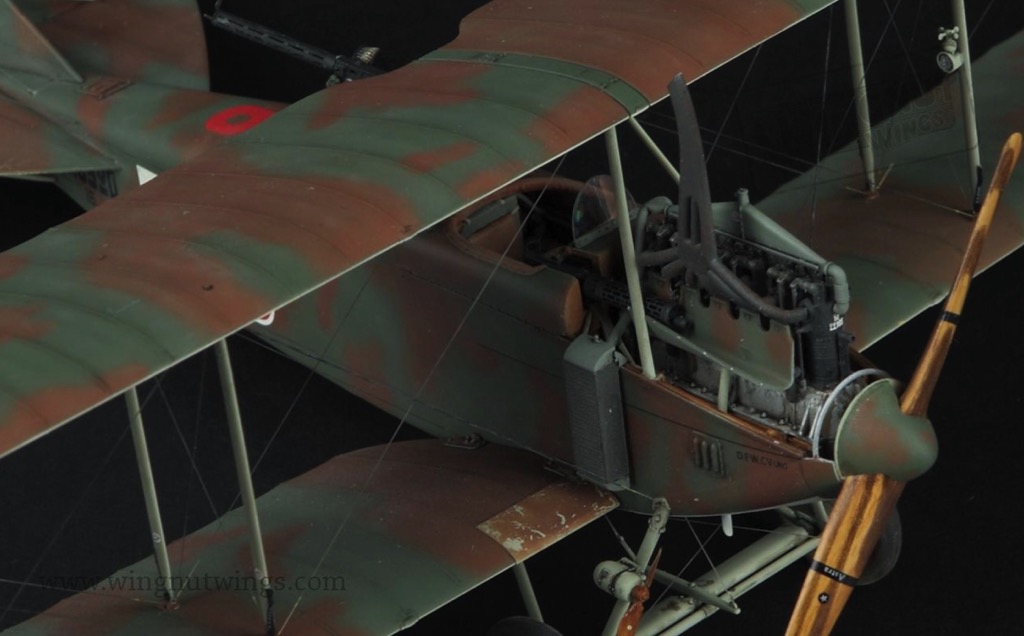 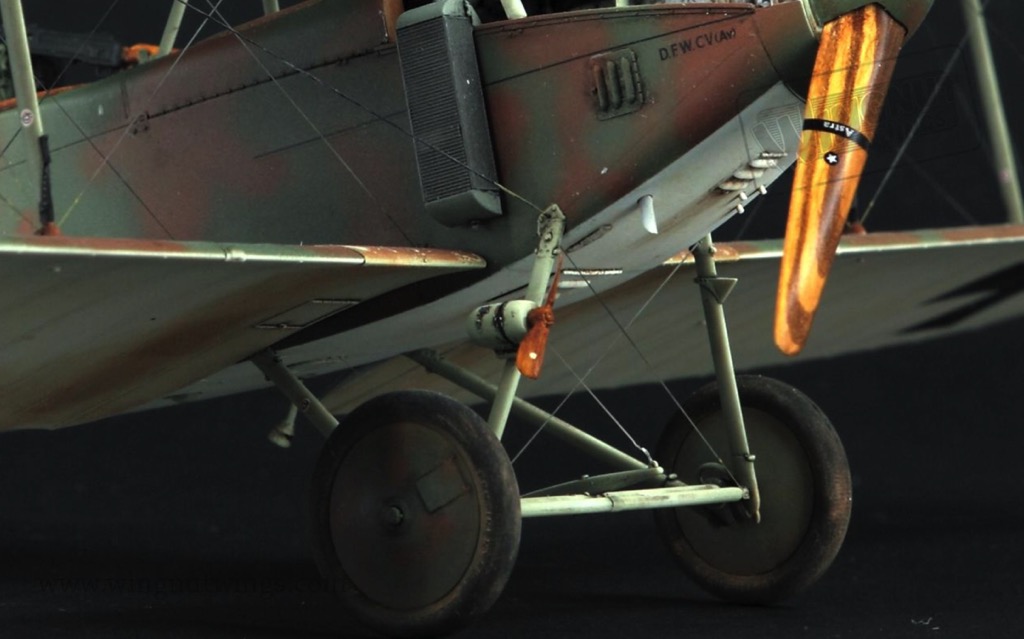 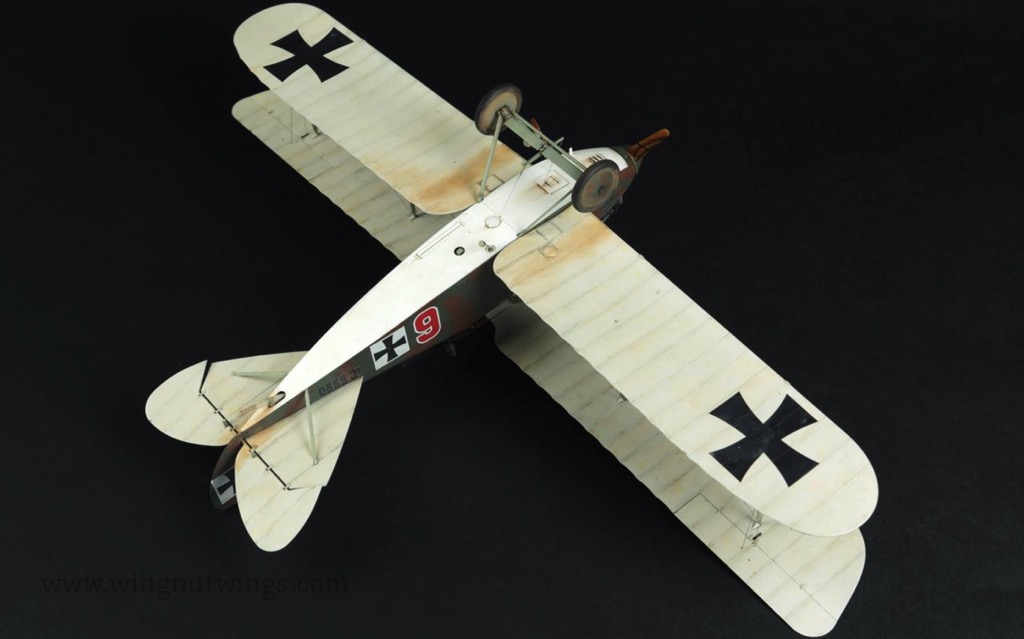 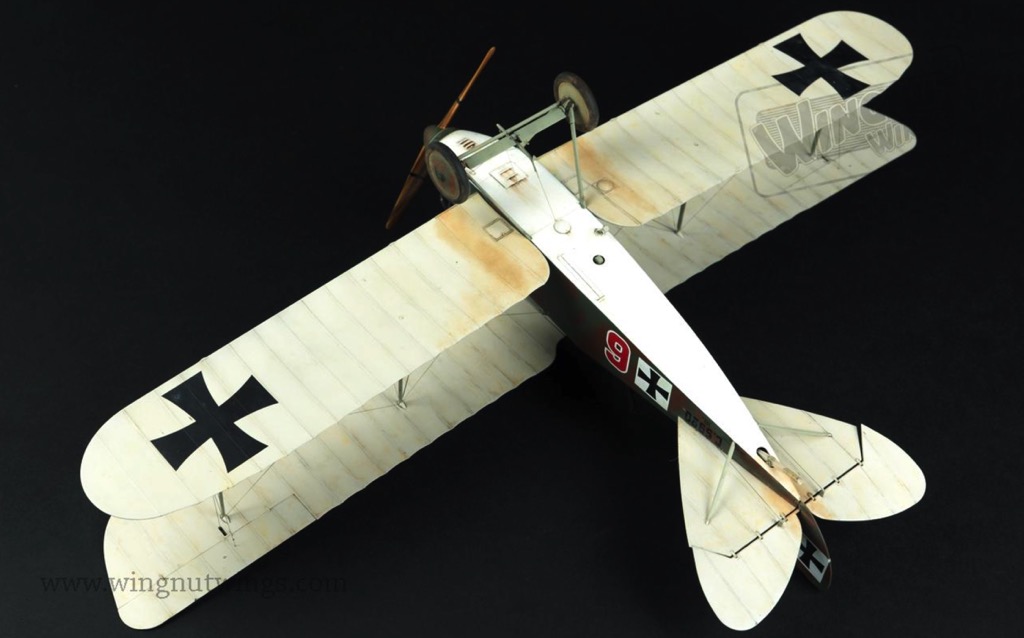 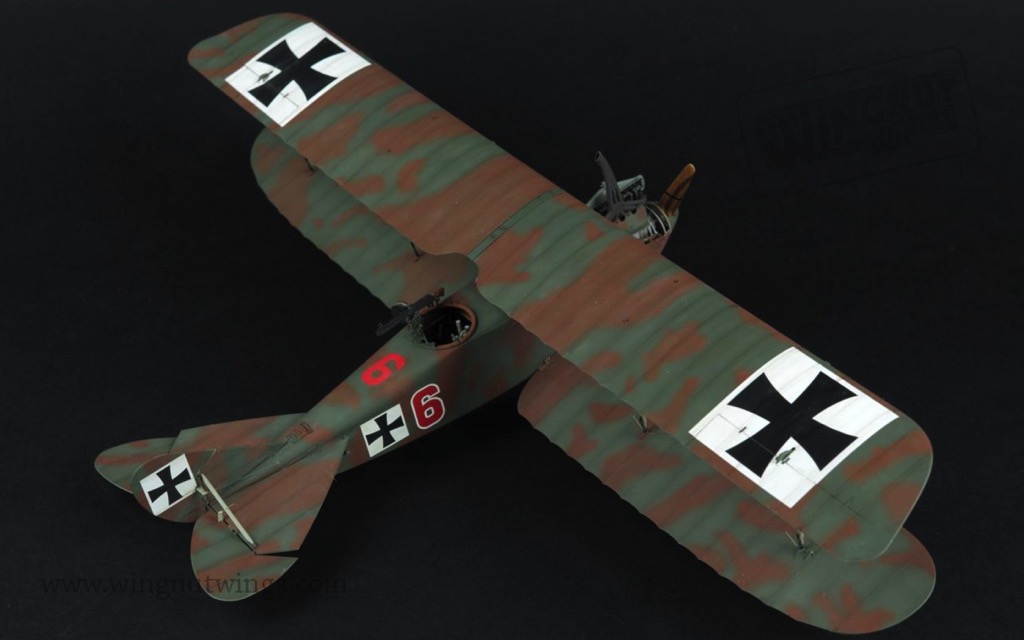 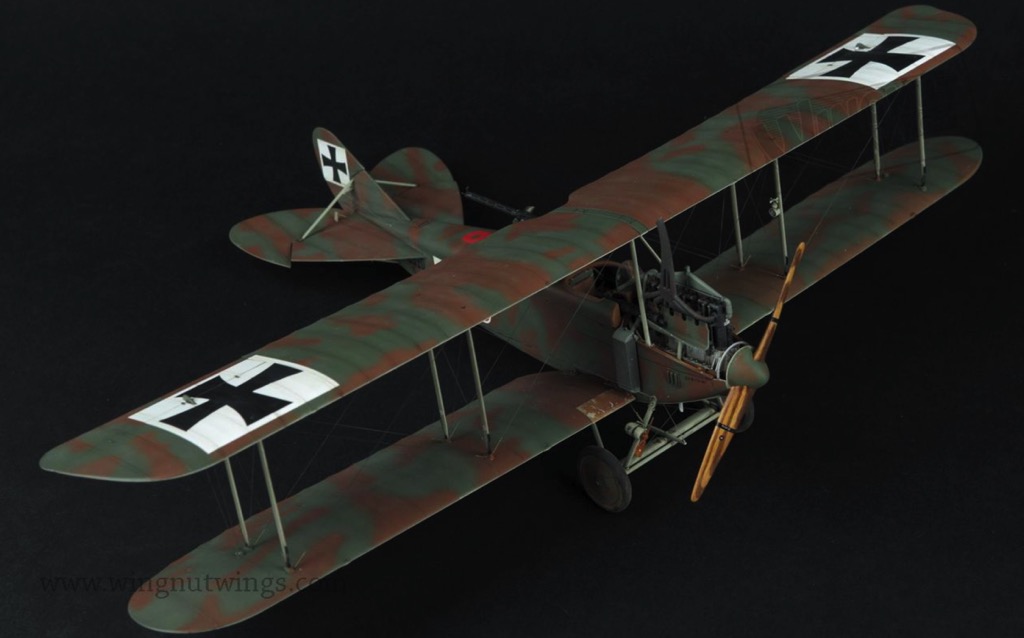 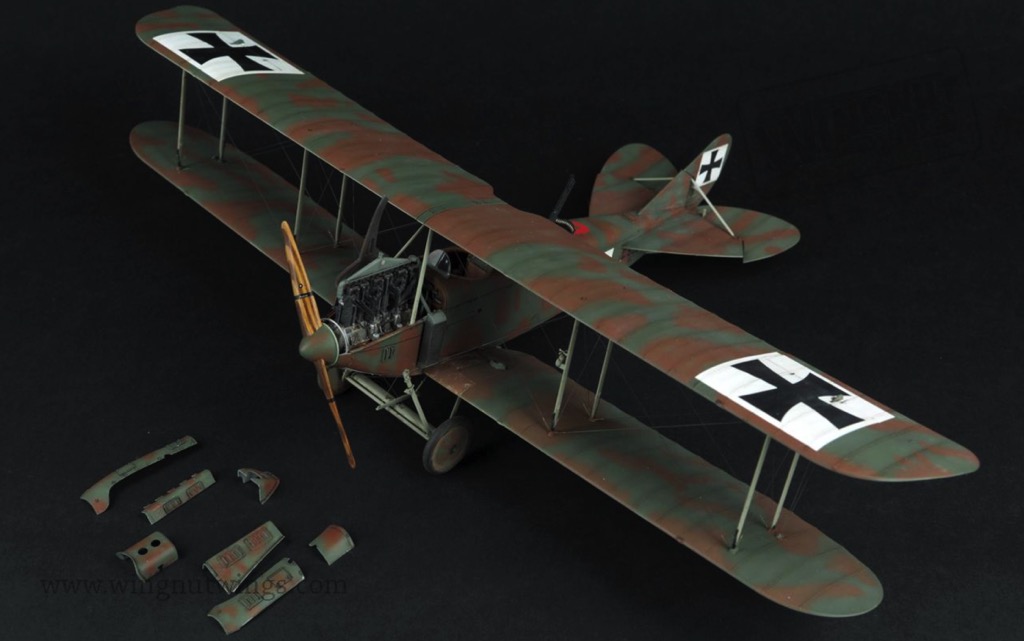 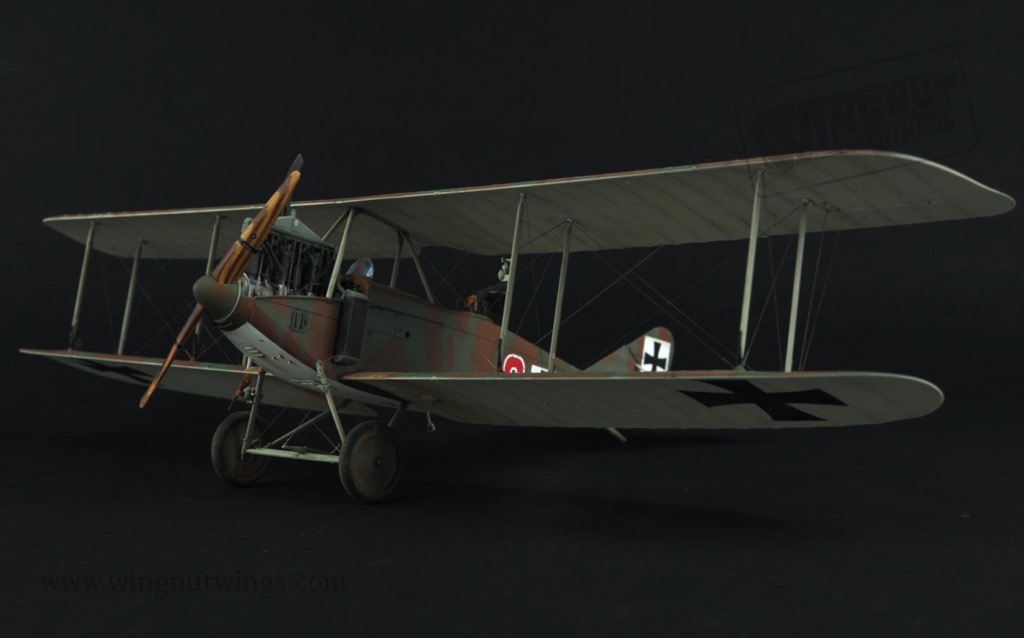 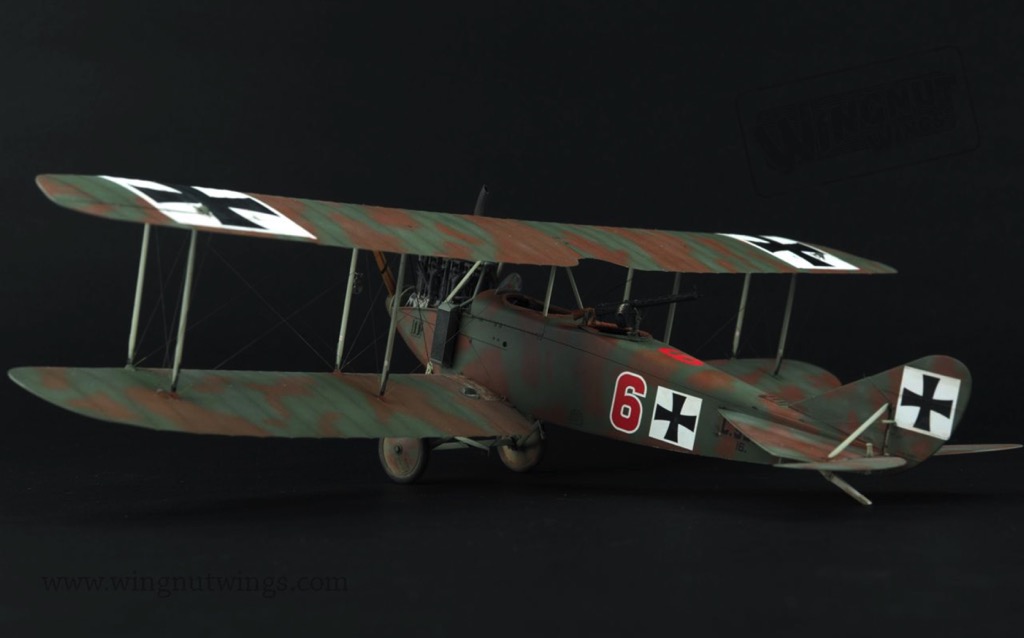 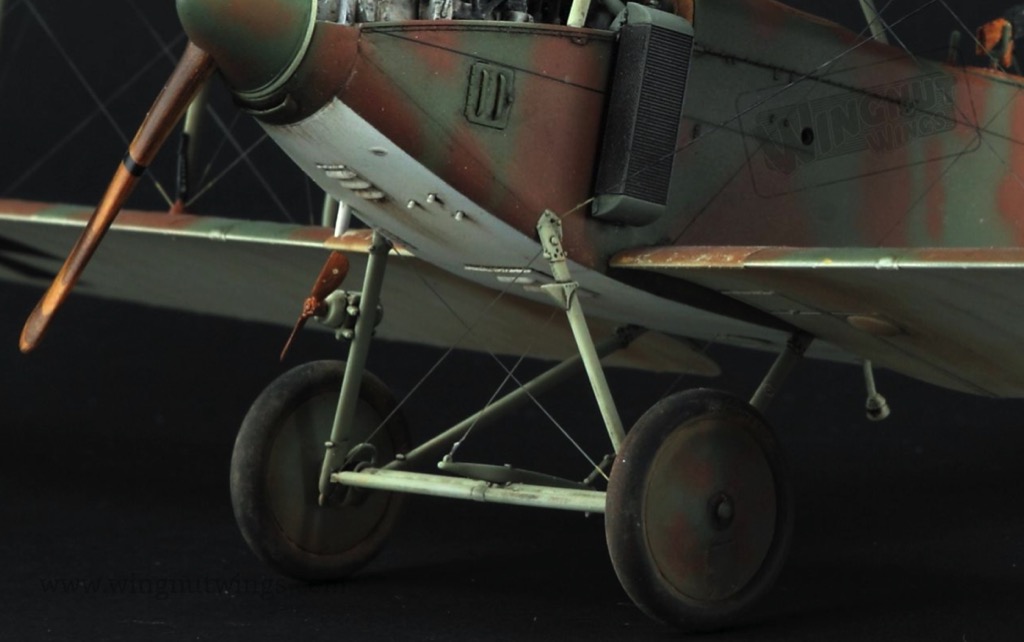 Features: The DFW C.V was arguably the single most important German aircraft of the First World War. The entire reason for military aviation at the time was to support the war on the ground and the most significant way to do this was through reconnaissance and artillery observation. A skilled artillery observer in a wireless equipped two-seater could kill more enemy with his index finger in a few minutes than the most skilled fighter pilots could in a lifetime and the DFW C.V was the most prevalent front line German two-seater of the war. Much mystery surrounds the development of the DFW C.V but the prototype appears to have first flown in May 1916 and passed its required structural tests in early August 1916 resulting in an order for 60 aircraft. By late October the 1st dozen or so production DFW C.V were serving at the front and had made such an impression that over the next couple of months 1000 more aircraft were ordered. Production continued up until the armistice, by which time nearly 4000 DFW C.V had been ordered from Deutsche Flugzeug-Werke (DFW) (2005), Automobile und Aviatik (1400), Luftverkehrsgesellschaft (LVG) (400) and Halberstadter Flugzeugwerke (150). LVG would go on to incorporate many aspects of the DFW C.V into their successful LVG C.V.

Early production DFW C.V featured a squared off nose, 'ear' radiators fixed to the sides of its plywood fuselage and aluminium cowlings fully enclosing the engine. The fuselage sides and bottom were covered in sheet ply with the smoothly curved upper surfaces created from strip ply 'mouldings', all covered with doped on fabric. The top and bottom wings were of conventional wood and wire construction while the ailerons and tailplane were assembled from welded steel tubes. Mid production DFW C.V incorporated an internal PuW bomb rack, a more aerodynamic nose and a spinner for the propeller. Late production DFW C.V ordered from November 1916 onwards featured a single radiator installed on the cabane struts in front of the top wing instead of the 'ear' radiators. The incredibly versatile DFW C.V was used for reconnaissance, artillery observation, bombing, as a two-seat fighter/ground attack aircraft and, fitted with the NAG C.III engine, as a purpose built trainer. Because it was built by 4 different manufacturers and for a comparatively long time there are numerous small variations between airframes which we have done our best to recreate.

WW1 colour schemes are contentious at the best of times and we have done our best to provide what we consider to be accurate painting information for this model. The various camouflage schemes and personal markings applied to German aircraft of the Great War have attracted more than their fair share of debate over the years and, while we have been as meticulous as we could be, I'm sure some will not find our choices to their liking. Contemporary descriptions of the many varied DFW C.V colour schemes include: Fuselage colours in '...dark grey, fairly bright grayish green and bright purple' (DFW), 'camouflaged in green and mauve' (DFW), '...brown... Hooker's dark green...almost a royal purple' (DFW), 'dark green and dark brown' (DFW), 'brown and green'(DFW & Av), 'uniform dirty green' (Av), 'grey in front and green in rear' (DFW), 'dark green, light green and blue" (Av), 'green and brown camouflage streaks' (Av), 'mottles yellow and brown', white, 'liver coloured' and 'orange': Upper surfaces of wings 'green' (DFW), 'light green' (DFW), 'sea-green' (DFW), 'dark green and dark brown' (DFW), 'green and mauve' (DFW), 'green and brown' (Av) and 'dark green, light green and blue" (Av), 'light green, dark green and mauve' (Av): Bottom surfaces of wings 'white' (bleached linen) (DFW & Av), 'dirty white' (DFW), 'bottom being painted white' (DFW) , 'clear-doped natural linen' (DFW) and 'bright yellow'! (Av): The 'fin, rudder, tail plane and elevators are a lighter shade of brown' (DFW). Some Halberstadt built DFV C.V received a multi colour sprayed and speckled camouflage finish similar to that found on the Halberstadt Cl.II. A number of late production aircraft received 4 and 5 colour lozenge fabric applied cordwise, spanwise and at 45 degrees depending on the manufacturer's preference, which were sometimes overpainted with camouflage colours. Additionally many colourful unit and personal markings were applied, all of which remain amongst the liveliest of topics for modellers to debate.