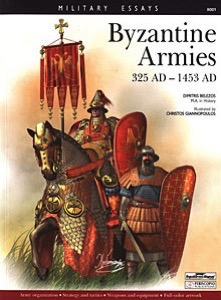 Manufacturer: Squadron Signal
Stock Number: SQU 8001
View all products of type "Armies"
View all products of type "Clash of Armies"
In-depth historical essay about the late Roman-Byzantine Armies that protected the Byzantine Empire for over eleven centuries. Contains the administration, ranks, logistics, weapons, campaigns and fortifications of the Byzantine Armies from 325 AD until the fall of the empire in 1461 AD. Reveals the checkered historical course of the empire and its military organization, which was compelled to defend its territories and culture against a horde of belligerent enemies from without and from the state's own bureaucracy within. During its long life span, the empire faced the Persians, Goths, Huns, Lombards, Slavs, Avars, Arabs, Bulgarians, Russians, Hungarians, Normans, Crusader armies and finally, the Turks. Illustrated with 75 photos, maps and additional graphics plus 13 full color plates. Also includes a glossary of Greek and Latin terms. Military Essays; Belezos; 136 pages. English text.