US Navy and Marine Corps A-4 Units of the Vietnam War
112 page book. 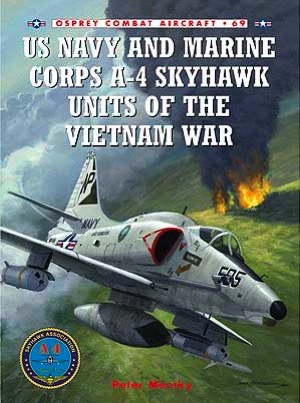 DISCONTINUED This product has been discontinued
and is no longer available.List price: $26.00
You pay: $18.79
(All prices in U.S. Dollars)

About this book
The Skyhawk was involved in Vietnam from the very beginning, including the first offensive operations in 1963 into Laos, and the Pierce Arrow operations immediately following the Tonkin Gulf Incident of August 1964. Navy and Marine Corps A-4s quickly established a presence in south-east Asia participating in thousands of sorties against the entrenched communist forces in the South and the heavily defended targets in North Vietnam. A-4 pilots also struck targets along the infamous Ho Chi Minh Trail, working with ground-based and airborne forward air controllers to interdict the flood of supplies to communist forces in the south. This book will include many first-hand accounts from the pilots who flew one of the greatest attack aircraft ever built and will provide an insightful account of some of the most thrilling aerial combats that took place during Vietnam.