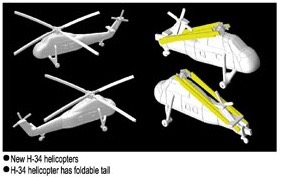 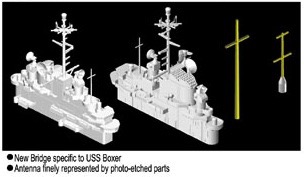 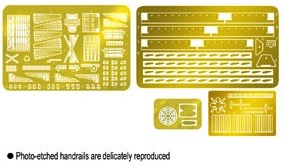 About the U.S.S. Boxer
Commissioned too late to see action in WWII, USS Boxer (CV-21) was an Essex-class aircraft carrier. She enjoyed a few milestones in her life, including the first ever jet aircraft carrier landing, and a record crossing off the Pacific in 8 days upon the outbreak of the Korean War when transporting aircraft and troops to Korea. The carrier had three tours of duty in Korea before she was transformed into an interim amphibious assault ship (LPH-4) on January 30 1959.

About this kit:
It's this helicopter carrier guise as LPH-4 that Dragon's new 1/700 scale kit represents. The magnificently detailed kit can be presented as a full-hull or waterline hull kit as both options are offered. Many of the parts provide flexibility - for instance, the flight deck elevator and deck-edge elevator can be displayed in any position. There are also 8 new UH-34J sea horse available to populate the flight deck. Wide use is made of photo-etched parts for items like antennas, safety nets and radar masts to ensure greater accuracy and scale authenticity. USS Boxer participated in the 1962 Cuban Missile Crisis, 1965 Dominican Republic intervention, and made a couple of trips to Vietnam to deliver troops and helicopters. It also helped recover the module from the first Apollo mission in 1966. With such a rich history behind it, modelers will have no shortage of ideas on how to present this fine model ship from Dragon!