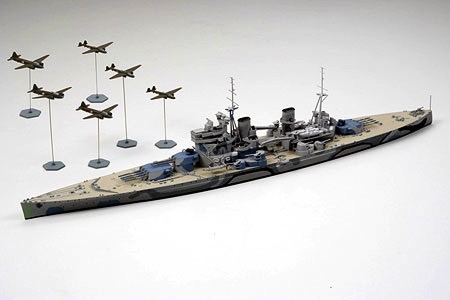 A Piece of Naval History
The British Battleship Prince of Wales was the second ship of the King George V class. Soon after her completion in March 1941, she was involved in the historic hunt for the German battleship Bismarck. In October she was deployed to South-East Asia to fortify the important British post of Singapore. However, her short career of a mere 9 months came to a dramatic end when intercepted by Japanese bombers in what was to be known as the "Battle of Malaya". Tamiya is proud to add the Prince of Wales as she stood during this historic naval battle to our high quality Water Line Series. Kit also features Japanese planes Type 96 "Nell" and Type 1 "Betty" attack bombers for a complete set to accurately recreate battle scene.

Battle of Malaya
On December 8, following the outbreak of the Pacific War, the Prince of Wales left Singapore after receiving intelligence that Japanese troops had begun to land in Malaya. The British Eastern Fleet under Admiral Philips, including the Prince of Wales, intended to meet the enemy at the Kuantan and attack a Japanese convoy. However, the intelligence was wrong and Kuantan was "as quiet as a rainy Sunday afternoon". On her way back to Singapore in the morning of December 10, the Prince of Wales was spotted by a Japanese scout plane. She was soon after attacked and badly damaged by Japanese Type 96 "Nell" and Type 1 "Betty" attack bombers. With her speed reduced, she came under waves of aircraft attacks, until she exploded and sunk stern first.

Type 1 Attack Bomber "Betty"
An Imperial Japanese Navy ground attack bomber delivered from 1940. Thanks to the dual mounted Mitsubishi air-cooled 14 cylinder engines, she boasted a combat range of over 4,200km. Widely used throughout the Pacific during WWII, she could carry a weapon's load of up to 1,000kg.