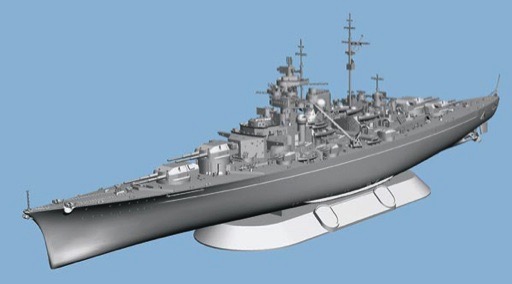 The Bismarck and the Tirpitz were the two largest battleships in the Second World War. The Bismarck, with a length of 251 m, went into service on 24.08.1940. On completion of the training runs she took part in the Rhine exercise. On 24.05.1941, in a sea battle off Greenland, she sank the British cruiser HMS Hood. Then the Bismarck, having damage to the bow, made for a Frenchport. During the pursuit by British ships and aircraft the ship was rendered unfit for action by enemy fire and scuttled in the Atlantic. Finely detailed components with rivets and recessed panel lines give an authentic reproduction of this imposing battleship. Other features of the model kit include moving gun turrets and barrels.