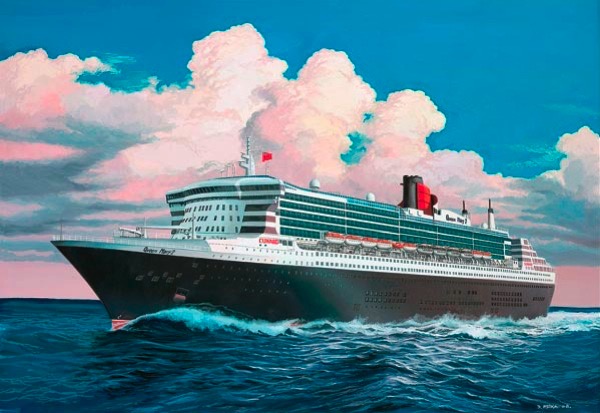 The Queen Mary 2 is the superlative passenger liner. With 150,000 GRT, she is the largest, longest (345 m), tallest (at 72 m she is taller than the Statue of Liberty) and most magnificent ship ever built for the Cunard Line. 2,620 passengers can be accommodated on 14 stylish and luxuriously equipped passenger decks, plus a crew of 1,253. With her long, elegant hull and powerful engines (max. 29 knots) she was specially designed for transatlantic crossings; from Europe (Southampton, England) to North America (New York) in 6 days. The Queen Mary 2 concept was created in May 1998. After a further two years in development, in November 2000 the order was placed with a French shipyard and she was handed over to the Cunard Line on 22 December 2003. After wintering in the Caribbean, in April 2004 the ship entered regular transatlantic service. The Queen Mary 2 continues the tradition of North Atlantic travel, thus perpetuating an era of ocean travel that was already claimed to have ended.