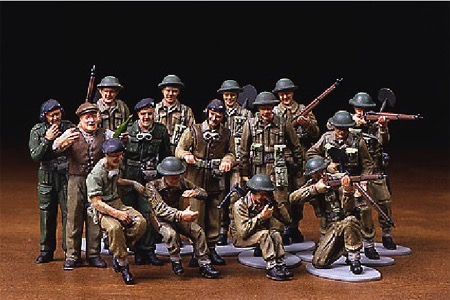 Our 4th MM Series infantry set introduces British soldiers to the 1/48 scale world. A wide variety of poses and figures, including riflemen, tankers and even a farmer is designed to suit all manner of modeling situations.

About the British Infantry
British infantry squads were made up of 10 men organized around the Bren light machinegun, and consisted of a machinegun group, formed by the second-in-command, machine gunner and loader, and a rifle group made up of 6 riflemen. The squad leader commanded both groups. The infantry uniform was marked by the distinctively shaped Mark II helmet, while the so-called Battledress of short wool jacket, leggings and boots was worn by all branches of the army. A denim version of the same battledress was worn in summer months, while leather jerkins were used in winter. Tank crews initially wore the same khaki battledress with the addition of a black beret, but in the later stage of the war this was largely supplanted by coveralls.