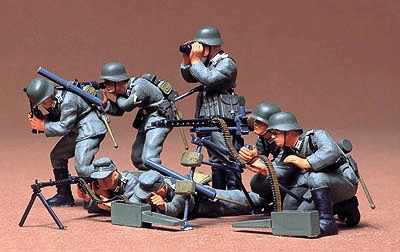 About the German Machine Gun Troops
At about the middle of the 1930's, the German Army organized offensive infantry corps which had machine guns and machine pistols as the nucleus of their small arms. The infantry division contained three regiments as its main body. Each regiment consisted of three battalions, which had four infantry companies each. The 1st, 2nd and 3rd companies each had twelve light machine guns, sixteen machine pistols, three light mortars and two antitank guns. The 4th company, which was called machine-gun company, was equipped with twelve (later sixteen) heavy machine guns and six medium mortars.

The machine guns that gave birth to and constituted the background of such organization were the well-known model 34 (MG-34) and model 42 (MG-42).

In 1934, Mauser completed a new machine gun of 7.92 mm calibre based on the Swiss Solothurn 30 machine gun then used by the Austrian Army. The new machine gun employed the Solothurn mechanism such as the air-cooled recoil operation system and the selective fire lever between continuous fire and single fire. It was linear and slender in appearance. Muzzle brake was fixed to avoid vibration and recoil caused by high cyclic rate of fire (up to 900 rounds per minute) that was one of the advantages of the mechanism. The gun was of the belt-fed type. Belts containing 50 rounds each were carried in a gun belt box with a capacity of 300 rounds.

Immediately after completion, the new machine gun was adopted by the German Army. Officially designated model 34 machine gun (MG-34), the weapon was mounted on a great number of combat vehicles and military planes as well as used by infantry corps. The MG-34 later showed activity in all theatres of war.

In 1942, the Model 42 machine gun (MG-42) first appeared in the battlefield. The MG-42 was a remodeled version of the MG-34 and better suited for mass production. Since pressing process was largely used to facilitat manufacture, it is said that even a small factory was able to produce it. The MG-42 had considerable improvements in performance over the MG-34. The rate of fire was much higher and reached 1,500 rounds per minute. In addition, the MG-42 was durable enough to withstand changes in temperature and rough handling in the battlefield. It showed its excellent performance that was never affected by such conditions. The Germans used the same machine gun as a heavy machine gun or a light machine gun according to its tactical use. The former was so called when used on a tripod for support fire and the latter was so called when used on a hipod as an offensive weapon for infantry.

Accessories for the weapon used as a light machine gun consisted of 300 round gun belt boxes, 50 round saddle drum magazines, spare barrels, tool kit and machine oil. When used as a heavy machine gun, the weapons had additional accessories as follows: telescopic sight, tripod, tripod container, single AA mount, antiaircraft ring sight, etc. (A sunshade was also added to the accessories when the gun was used in the tropics.)

Machine guns posessed by the Germans totalled 126,800 in number at the outbreak of World War II but they increased to 231,000 in January 1945 near the end of the war. This shows what great importance the German Army attached to its machine guns.