'Twelve to One' V Fighter Command Aces of the Pacific
128 page book. 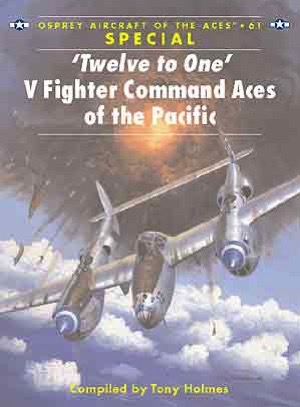 About this book
This volume details the experiences of 107 elite American aces in combat against the Japanese. The highest scoring US pilots of World War 2 fought against the Japanese Army Air Force and Imperial Japanese Navy over the jungles of New Guinea and the Philippines. Flying P-38s and P-47s, men such as Dick Bong and Thomas McGuire won the Medal of Honor for their successes in combat in 1943-45. 'Twelve to One' is a rare document that details the 'tricks of the trade' employed by these men. This volume also includes biographies of the men whose tips for aerial combat make up the text, and the V Fighter Command Manual.