Strongholds of the Picts
64 page book. 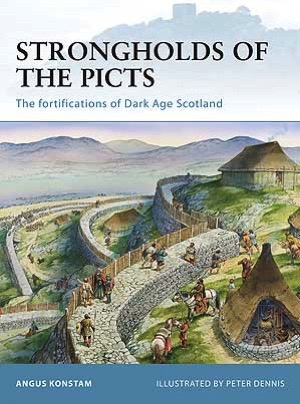 Manufacturer: Osprey Books
Stock Number: OSP FOR92
View all products of type "Fortifications"
Strongholds of the Picts: The fortifications of Dark Age Scotland

About this book
When the Romans withdrew from Britain, the north of the country was ruled by the most mysterious of the ancient British races, the Picts. Much of what is known about these "painted" warriors, comes from the remains of the fortifications that they left scattered around Scotland. Although the Picts are famous as sea raiders, they were also subjected to attacks from a number of opponents. To their south, the Romano-British reoccupied the abandoned Roman fortifications and hired Saxon mercenaries to strike against the Picts. Meanwhile, from the west a new group, the Scoti, attacked from Ireland. This book covers the fortification of the ancient Picts in all their conflicts and discusses the importance of these sites as religious centres and seats of power, while using the latest archeological evidence to help unravel the mystery of this ancient race.