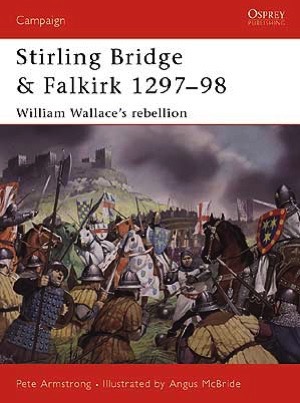 Manufacturer: Osprey Books
Stock Number: OSP CAM117
View all products of type "Clash of Armies"
View all products of type "Battles"
About this book
The death of the last of the Scottish royal house of Canmore in 1290 triggered a succession crisis. Attempts to undermine Scottish independence by King Edward I of England sparked open rebellion culminating in an English defeat at the hands of William Wallace at Stirling Bridge in 1297. Edward gathered an army, marched north and at Falkirk on 22 July 1298 he brought Wallace's army to battle. Amid accusations of treachery, Wallace's spearmen were slaughtered by Edward's longbowmen, then charged by the English cavalry and almost annihilated. In 1305 Wallace was captured and executed, but the flame of rebellion he had ignited could not be extinguished.