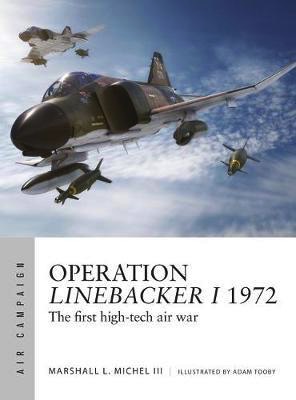 Manufacturer: Osprey Books
Stock Number: OSP ACM8
View all products of type "Campaigns"
View all products of type "Air Warfare"
At Easter 1972, North Vietnam invaded the South, and there were almost no US ground troops left to stop it. But air power reinforcements could be rushed to the theater. Operation Linebacker's objective was to destroy the invading forces from the air and cut North Vietnam's supply routes - and luckily in 1972, American air power was beginning a revolution in both technology and tactics.

Most crucial was the introduction of the first effective laser-guided bombs, but the campaign also involved the fearsome AC-130 gunship and saw the debut of helicopter-mounted TOW missiles. Thanks to the new Top Gun fighter school, US naval aviators now also had a real advantage over the MiGs.

This is the fascinating story of arguably the world's first "modern" air campaign. It explains how this complex operation - involving tactical aircraft, strategic bombers, close air support and airlift - defeated the invasion. It also explains the shortcomings of the campaign, the contrasting approaches of the USAF and Navy, and the impact that Linebacker had on modern air warfare.