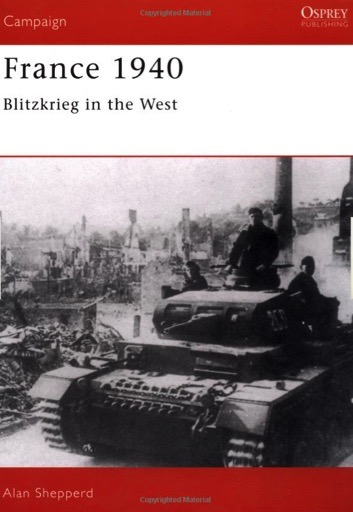 Manufacturer: Osprey Books
Stock Number: OSP CAM3
View all products of type "Campaigns"
View all products of type "Armor Warfare"
About this book
The German victory of 1940 stunned the world. France, major European power and owner of the world's largest armies had fallen in less than seven weeks to the might of the German Wehrmacht. The secret of the Wehrmacht's success lay in its carefully thought out organization and the tactics of blitzkrieg. Fast moving tank divisions supported by armoured, mobile infantry swept over opposition, helped by both conventional bombers and deadly Stuka dive-bombers. Alan Shepperd's highly detailed text examines the tactics, organization and equipment of the Allied and German forces, and provides a daily account of the most crucial period of the battle.