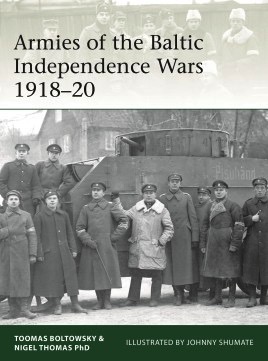 Manufacturer: Osprey Books
Stock Number: OSP ELI227
View all products of type "Armies"
Immediately following the end of World War I, amid the collapse of the German, Austro-Hungarian and Russian Empires, bitter fighting broke out in the Baltic region as Poland, Finland, Estonia, Latvia and Lithuania struggled for their independence, and Red and White Russian armies began their civil war. There were also German forces still active in what had been the northern end of Germany's Eastern Front. This book offers a concise but detailed introduction to this whole theatre of war, focusing on the Estonian, Latvian, Lithuanian and relevant German and Russian forces, plus Finnish, Danish and Swedish contingents. For each region there is a detailed map as well as meticulous orders-of-battle and insignia charts. Detailed for the first time in the English language, this fascinating book concisely tells the story of the birth of these Baltic nation states.