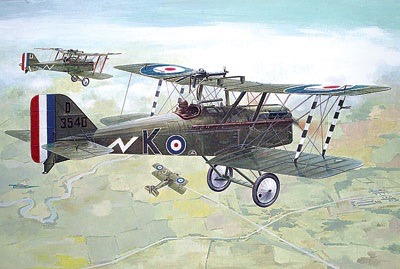 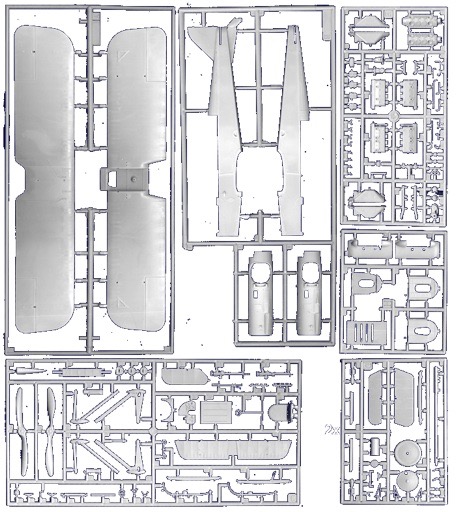 One of the most successful British fighters of WWI, the S.E.5a was built in 1917 under the direction of the Royal Aircraft Factory's leading designer, H.P. Folland. The predecessor of the S.E.5a was the S.E.5 the first attempt to adapt Hispano Suiza's promising new engine to the British airplane.

The S.E.5 was built in relatively small numbers because the new engine was too unreliable due to various shortcomings. It caused numerous problems in service but in spite of that, the Royal Flying Corps' 56 Squadron gained many impressive successes with the type and one famous British ace of the time, Albert Ball, considered the S.E.5 the best of the best.

The appearance of an improved and more powerful 200 h.p. Hispano Suiza engine allowed designers to revise and develop the design of the aircraft and release its potential. In comparison with its predecessor the outline of the edges of the wings was changed slightly, and the huge glass 'greenhouse' canopy gave way to a standard windscreen. The nose portion of the fuselage was reshaped to suit the new radiator. Additionally, a new four blade screw was fitted to the S.E.5a.

In comparison with other designs of the time, the S.E.5a was not a masterpiece of elegance, but the outstanding features of the airplane lay elsewhere. The unusual strength of the construction, its high speed, reasonable maneuverability and excellent view from the cockpit very quickly made the S.E.5a a favorite of fighter pilots. Being on the front line until the last days of the war, the S.E.5a was a serious opponent for 'Germany's last chance' - the celebrated Fokker D.VII, and only the famous Fokker Dr.I surpassed the S.E.5a for combat maneuverability.

The success of the type and operational needs resulted in its production under license at other plants - Austin Motors, Martinsyde, Vickers, and Wolseley Motors. More and more squadrons of the Royal Flying Corps re-equipped with the S.E.5a, and later it became the principal machine in the sky of the Western Front. The victory march of the S.E.5a was hindered by one aggravating factor the Hispano Suiza engines, despite all attempts at improvement, quite often failed during flight, which led to tragic accidents and losses due to these particular technical problems.

And on top of that, another severe problem was simple wear and tear to the engines - to a sufficient degree that France's Military Air Corps required most of the Hispano Suizas for its own SPAD fighters, leaving little possibility of satisfying the requirements of allies.

Only afterwards, once British engineers had perfected the Hispano Suiza and initiated its production on the territory of the mother country, was the problem solved, and the new model S.E.5a joined another famous fighter, the Sopwith Camel; only then did His Majesty's Flying Corps acquire an aura of real invincibility.

The most famous aces of the Royal Flying Corps Edward 'Mick' Mannock, Billy Bishop, Roderick Dallas, James McCudden, Andrew Beauchamp-Proctor and others - flew the S.E.5a. It was more than just an airplane in their hands: it was a highly dangerous lethal weapon, which time after time proved the inevitability of allied victory in the sky.

After the end of the war a very small number went to the USA and Australia. Some S.E.5a's appeared by chance even in Russia. However, the principal fame of this machine is connected with its heroic fights in the sky of the Western Front.