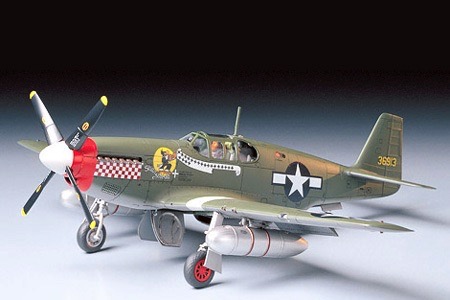 About the North American P-51B Mustang
The Allison engine powered P-51A Apache, was derived from the original RAF Mustang 1 ground attack and photo reconnaissance aircraft. Long before anyone had even heard of a Mustang, the plan to put a Rolls Royce Merlin engine into the airframe had started. The Merlin was powering some of the best warplanes in England; the Hurricane, Spitfire and the Avro Lancaster bomber. To develop a new engine for the P-51 would take considerable time, which the allies did not have.

In September 1940, the Packard Motor Company of the U.S. began license production of the Merlin V-1650-1 engine in Detroit, Michigan. With a new supercharger drive, a new V-1650-3 was mated to the first P-51B. Both the U.S. and England started the Merlin engine modification idea almost simultaneously. 10 airframes were modified in the U.S. with the Merlin and these became the basis for the most successful fighter series of the war.

Flying for the first time on 30 November 1942, the XP-51B was soon modified with a larger coolant radiator scoop, which actually increased its top speed by 50mph and gave it a higher ceiling by 10,000 ft. The addition of an 85 gallon fuel tank behind the seat increased the P-51B's already excellent range, and it could now escort the bombers all the way to the target and back. P-51B Mustangs began arriving in England in September 1943 with the first Mustangs going to the 3354th fighter group at Boxted, England, and ended the war with the most air to air victories. A total of 3788 P-51B's were produced.