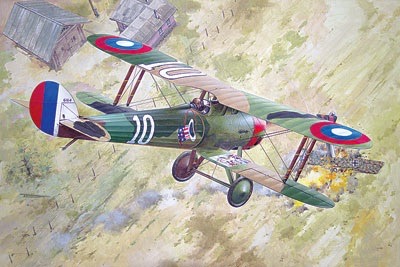 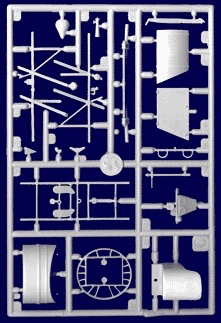 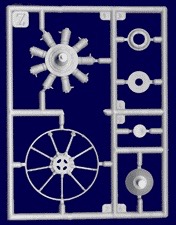 In 1917 the French aircraft manufacturer Societe Anonyme des Establissements Nieuport produced a series of new fighters the Nieuport 24, the Nieuport 25 and the Nieuport 27. All of these types were progressive modernizations of the famous Nieuport 11 and Nieuport 17, which due to their very good flying characteristics, were possibly the best fighters at the time of their appearance. However, technical progress during the war years stepped on so briskly, that even the most successful designs could become obsolete within the year. At the end of 1917 it was decided to concentrate on building a conceptually new fighter. Unlike its predecessors, which were sesquiplanes rather than standard biplanes, the new fighter had wings of equal span and constant chord, and also an oval section fuselage (this innovation proved its worth in the Nieuport 27).

By the beginning of 1918 there had taken place the first successful test flights of the new machine, designated the Nieuport 28. It was one of the most elegant of contemporary single-seaters: the upper wing sitting close to the fuselage, the fuselage's slim outline, and an elliptical tail assembly completed its aesthetically pleasing looks. A 160 hp Gnome Monosoupape 9N engine was installed in the Nieuport 28, and its armament consisted of two synchronized Vickers guns.

It was intended that the Nieuport 28 would replace another French fighter, the SPAD VIIC.1, which had many problems with its Hispano Suiza engine. However, by the time the Nieuport 28 completed its tests, SPAD had produced a new type the SPAD XIIIC.1. This design exceeded Nieuport's machine in almost every respect and was accepted as the sole new fighter of the Aviation Militaire. It was decided to reject the Nieuport 28, and its fate would probably have been the same as that of hundreds of other relatively successful machines of the time, to remain as a prototype. However, fate decided differently, and the Nieuport 28 achieved its place in the history of aviation as the 'first American fighter'.

After the entry of the United States of America into the war, the American Expeditionary Forces needed airplanes urgently for their own new air force units. The U.S.A. bought a variety of types of airplane at that time, which France made available. In this way the Nieuport 28 became the foundation of American air power in the skies of Europe. The Nieuport firm sold America 297 machines in total, which equipped the 27th, 94th, 95th and 103rd Aero Squadrons.

The Nieuport 28 gained its first victories in April of 1918, when Lieutenants Douglas Campbell and Alan Winslow brought down two German airplanes in the sky of the Western Front.

In this fashion began the history of the United States Army Air Force. The most successful American ace of WWI, Eddie Rickenbacker gained several victories piloting the Nieuport 28. "The well known pilot Quentin Roosevelt, son of the President of the USA Theodore Roosevelt, also flew this airplane."

American pilots spoke approvingly of the maneuverability of the fighter, however, its general performance fell more and more behind that of the enemy's newer types. The Nieuport displayed a dangerous design fault in operation the fabric of the upper wing could simply break away during intensive maneuvering, and as a result there was a series of terrible catastrophes. Little time was spent to remedy this defect, and improve the machine's construction, and operation of the type was reduced to a minimum; but exactly at that time America bought from France the more advanced SPAD XIII in great quantity, and consequently there was no particular need to return the Nieuport 28 to the Front in the summer of 1918, although some machines were still being used at the end of the summer.

With the end of WWI, the American Expeditionary Forces returned to the homeland. The airplanes brought back from Europe became the basis of the new American air arms. The Nieuport 28 was used as a trainer and also for shipboard operation. A few years later the type was officially acknowledged as out-of-date and retired from service. Some machines were used in various civilian 'flying circuses' and also for the needs of Hollywood. Switzerland, Argentina, Greece and Guatemala received some machines.