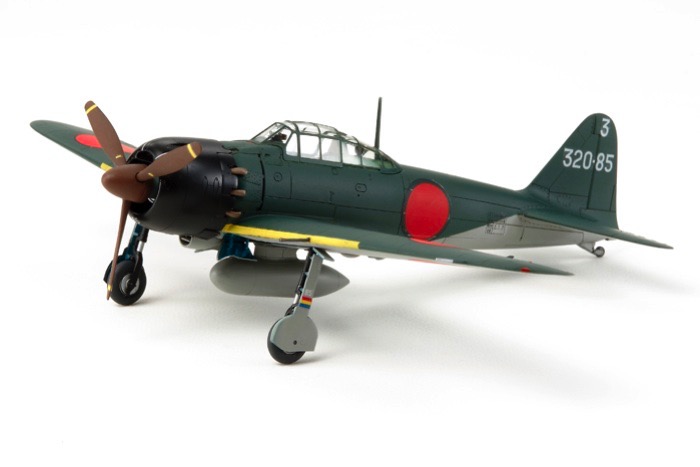 This is the definitive 1/72 plastic model of the Japanese Navy's representative fighter aircraft, the Mitsubishi A6M5 Zero Fighter.

History of the Zero fighter: The Mitsubishi A6M Zero was the Japanese Navy's main fighter throughout the Pacific Theater during WWII. In the latter half of the war, the model 52 Zero, a refined version of the model 22, aimed to take on the ever increasing numbers of high-performance U.S. aircraft. It featured a shorter 11m wingspan with rounded wingtips, was powered by the same 1130hp Nakajima "Sakae" engine as seen in the model 22 Zero, and had the new exhaust propulsion system which gave it a 565km/h top speed. The A6M5 came armed with two 7.7mm machine guns and 20mm belt-fed cannons. Deployment of the A6M5 began in the autumn of 1943, and they saw action in the Solomons campaign as well as over the Marianas. It defended Japan against overwhelming numbers of superior U.S. aircraft up until the very last day of the war.