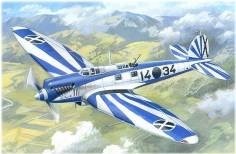 The Heinkel He 70 was designed by the Gunther brothers in early 1930s to serve as a fast mailplane for Deutsche Lufthansa. It was a low winged monoplane, with the main characteristics of its revolutionary design its elliptical wing, and its small, rounded control surfaces. The first prototype flew on 1 December 1932, and proved to have excellent performance, setting eight world records for speed over distance, and reaching a maximum speed of 377 km/h (222 mph). Twenty-eight aircraft were sent with the Legion Condor, where they were used during the Spanish Civil War as fast reconnaissance aircraft. Their high speed gave them the nickname Rayo (lightning).

This ICM model was issued by the famous Ukainian modeler Valentin Muchichko, who used the original drawings. This model has highly detailed interior, wheelwells, accurately produced metallic, wooden and linen surfaces. The instrument panels are accomplished in clear polystyrene. The kit consists of 2 variants of decals: planes He 70F-2 of Condor Legion and Gruppo 7-G-14 Spanish Nationalist Air Force.