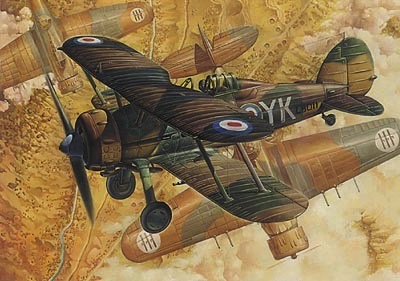 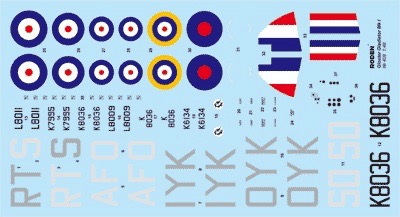 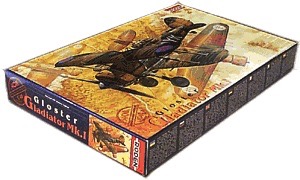 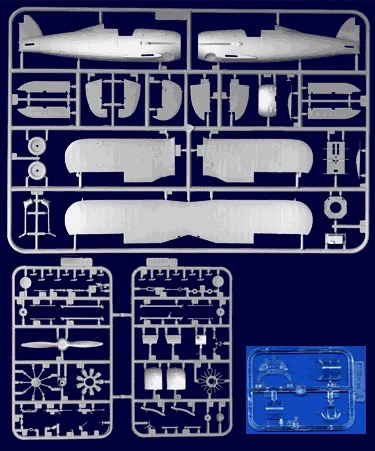 In the early thirties of XX century the majority of RAF fighter squadrons were equipped with obsolete Bristol Bulldog and Gloster Gauntlet types. At this moment first designs of monoplane fighters appeared, but all of them were unfinished. Gloster's chief designer H.P. Folland conducted a detailed examination of the Gauntlet design with the purpose of improving main performances. Gauntlet's wings with two-bay units were changed into the single-bay units with strengthened main spars, landing gear was also redesigned -- internally-sprung wheel assemblies mounted on cantilever struts. New plane was equipped with more powerful Bristol Mercury VIS engine, armament increased up to four machine guns (two-in fuselage, two-under the lower wings).

Prototype of the new fighter with factory designations SS.37 was tested in September 1934 and reached maximum speed of 242 mph (389 km/h). Air Ministry issued Specification F.14/35 and ordered 23 aircrafts of this type which soon received its own name - Gladiator. Mass-production fighters had more powerful Mercury IX engine, enclosed cockpit, revised tail unit. In total, 231 Gladiator Mk I were delivered to the RAF.In accordance with new Specification F.36/37 Gladiator was slightly improved: it had 830-hp Mercury VIIIA engine with automatic mixture control, electric starter and a Vokes air filter in the carburetor intake. The Royal Air Force received 252 planes of this type, Gladiator Mk.II. Mk.II was closely similar to Mk.I, apart from three-blade Fairey Reed airscrew installed on quite a number of Mk.II (some Mk.II like Mk.I had two-blade wooden Watts airscrew).

First squadrons received Gladiators in February 1937, however in the middle of 1939, just before the outbreak of WWII, only four auxiliary home-based units operated with this type, all other squadrons were re-equipped with modern Hurricane Mk.I and Spitfire Mk.I.

In spite of the obsolescence of its construction and poor performances as for 1939, Gladiator was intensively used in many major battles of the early stage of WWII. During the Battle of Norway pilots of No.263 Sqn RAF shot down at least 26 German aircrafts, and lost only two Gladiators in combats. However, the Gladiators were most efficiently used in North Africa and Mediterranean, where No. 6, 33, 80, 94, 112, 127 Sqns RAF together with No.3 Sqn RAAF fought against equally obsolete Italian Fiat Cr.32 and Cr.42. The most well-known Commonwealth ace, Flt. Lt. M. T. St. J. "Pat" Pattle won many air victories from his total score of 58, flying with Gladiator.

After the Soviet invasion of Finland, the Great Britain delivered a lot of aircrafts to Finnish Air Force, including a number of Gladiators. These fighters together with Swedish volunteers, which flew their own Gladiators, received many victories in air combats against Soviet AF planes.

Gloster Gladiator was widely exported to a number of countries: Belgium, China, Egypt, Ireland, Greece, Latvia, Lithuania, Norway, Sweden, Iraq, Portugal. Latvian and Lithuanian Gladiators joined the Soviet Air Force after the annexation of these countries by Soviet Union in 1940, but one year later some of them got to the Luftwaffe where they served as trainers. Some aircrafts from RAF squadrons were delivered to the Free French Air Force in 1942. After the withdrawal from the first line many Gladiators still were used like liaison aircrafts or weather reconnaissance planes until 1944. In total, together with export planes and Sea Gladiators, 746 aircrafts were built.