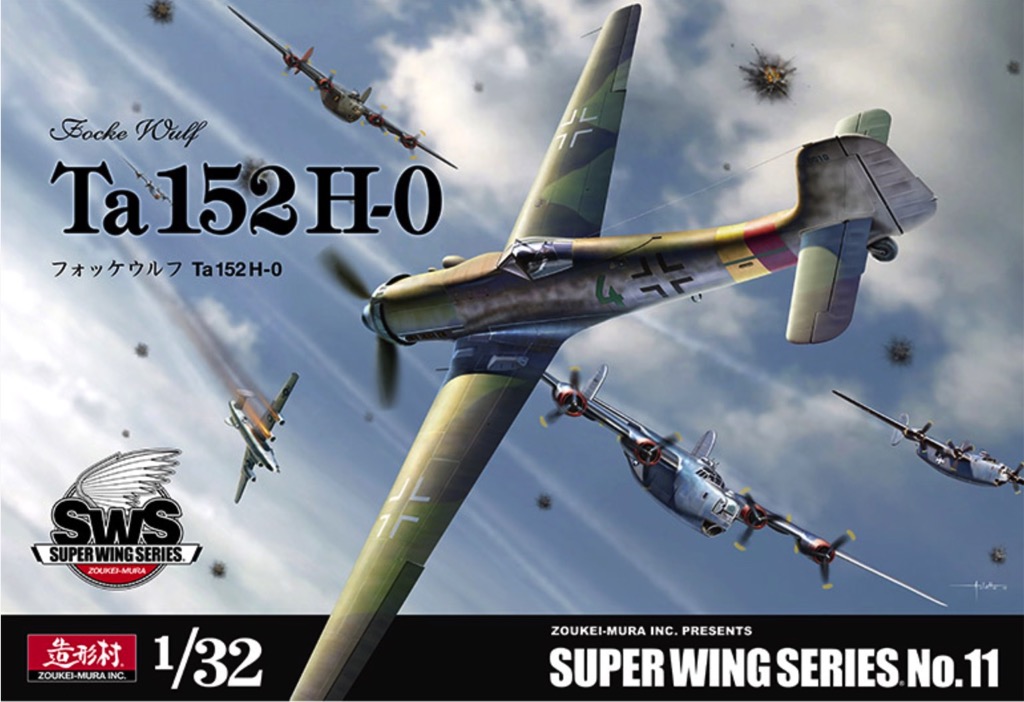 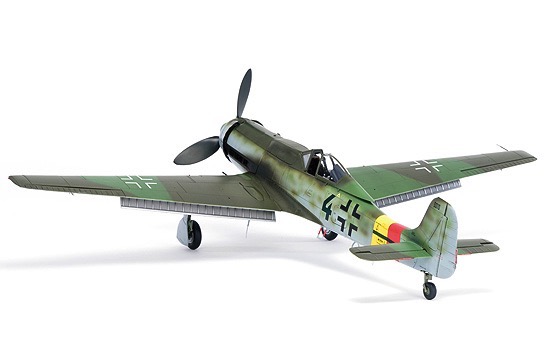 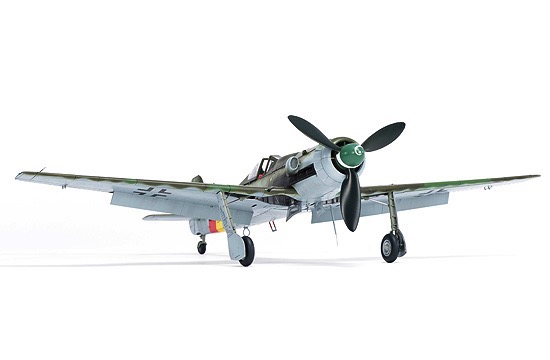 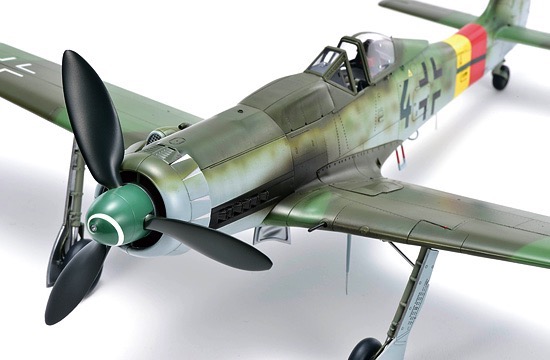 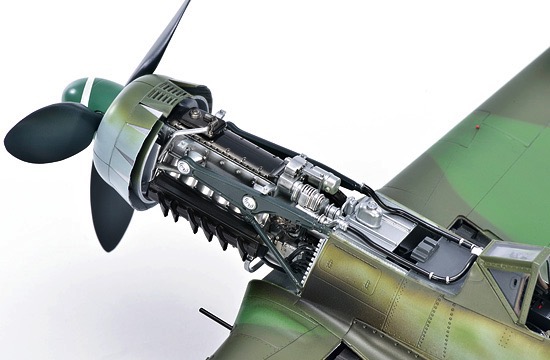 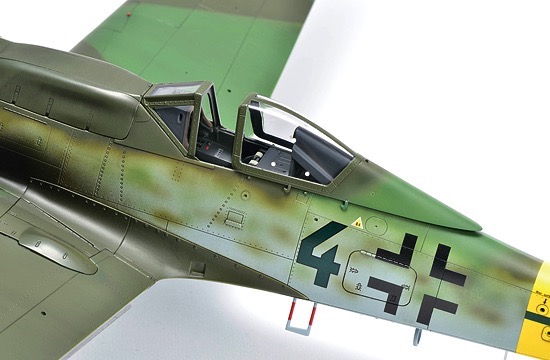 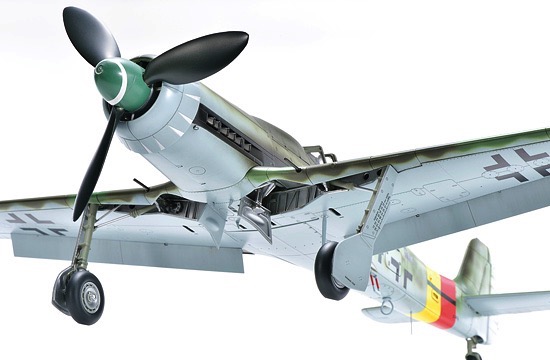 Backordered (Sign up for an email
notification when it's
back in stock!)$108.00

The Homeland Defense's last weapon!
May 1942. In order to intercept the strategic bombers coming from the enemy, the German Air Ministry required for the near future a "special high-altitude fighter" which specifications should be a pressurized cockpit and the capability to fly over 13,000m.

As a response to this request, the Focke-Wulf Company developed as an improved model of the already fighting masterpiece Fw 190 the ultimate fighter, equipped with a liquid-cooled engine back and forth, a long fuselage and long, as wide, wings. The first prototype came out in August 1943. During the last days of the Great War, the "Ta 152", ultimate reciprocating jet fighter demanded for the Homeland Defense, was finally born.

Experience the latest evolution process of the Fw series!
The production of reciprocating fighters was stopped as war conditions continue going bad to worse, as well as the fuel reserves. Anyway the sole production allowed was the Ta 152 equipped with the Jumo 213 E that used B4 fuel since it was relatively easier to produce. It shows how the last hope of those days was entrusted with this machine. And here born the "H-0", the first mass production type with its fuel tank installed on the fuselage only instead on its wings. At first, the plane went without both, the GM1and MW50 output enhancer equipments. Its main feature is the big differences with the "H-1", like the internal structure as well as the position of the oil inlet and the inspection port. That differences have been reproduced in details with our SWS kit thanks to an intensive investigation of the documents about the real machine. Please enjoy the latest evolution process of the Fw series with this kit!

The selected nose and propellers' shapes are the true value of SWS!
The liquid-cooled engine equipped Ta 152 has an extended nose to reach higher altitudes, which gives the airplane a very special outline. That shape has been thoroughly reproduced with our SWS kit, based on the information gathering on the real machine. The line of the nose upper surface going from the window shield to the engine cowling is stronger, while the louver and the breather-our of the crank case are also reproduced in their smallest details. Also, the wide wood-enforced Junkers VS9 propellers adopted a gear shaped oil motor serving as a power source to change the angles of the propeller pitches. They are made of 3 blades of 3.6m diameter each and rotating at a constant speed. Please fully enjoy the structure of the plane as well as the propellers' shape, "soul" of reciprocating planes, which have always been a main part of SWS.

Not only high-altitude performances, but also more firepower. That's the "Jumo 213 E" engine!
Junkers Jumo 213 E engine is a liquid-cooled V-shaped 12 cylinders SOHC engine, adopting a direct injection fuel-system without carburetor. The motor cannons could not be equipped on the 213 A installed on the Fw 190 D-9 because of a fuel conduction passing through the whole axis section in order to change the angles of the propeller pitches, but the fuel conduction has been redesigned in this 213 E engine allowing the installation of motor cannons, which is reproduced in the kit. As for the supercharger, it is a double level - three speed with air cooler placed just behind in order to cool down the pressurized air. Then, the structure of the shrouds located inside the circular radiators, and the pipes - preferred to MG 151 machine guns initially planned to be installed on the upper surface of the nose - conducting the fresh and compressed air to the cockpit, are easy to understand with this SWS kit.

Pilot life-support equipments in high altitudes!
The Ta 152 H-series has a pressurized cockpit, where high pressure starts running from an altitude of 8,000m and air is secured with a maximum pressure differential of 0.23 from 14,000m. The pressurized cockpit of the Ta 152 H series has a rough external panel covered with a steel frame, while an interior air pressure adjustment and airtightness are meant to keep the pilot safe. Literally life-supporting. Furthermore, this SWS kit represents the thickness of the bullet proof glass of the window shield equipped with a 70mm electric pressure heater on the front, and also the details of the fuel spout pipe for cleaning inside the triangular side structure. This and more is the core of what you can experience by building an SWS kit.

The long, big and beautiful wings, as well as the strong landing gears make up the charm of this high-altitude jet-fighter!
With the H-0, the fuel tanks were inserted only in the fuselage, while with the H-1 two fuel tanks and a 70L capacity water tank have been eventually installed on the inside of the left wing, and three fuel tanks have been placed on the inside of the right wing. You may see at a glance to the panel lines of the main wing surfaces, the differences with the H-1. Since the positions of the oil-pressurized cylinders are different between the two planes, the position of the torque arm-link of the aileron steerage mechanism is also different. Thanks to the SWS techniques reproducing rationally the inner and outer structure differences of both planes, these wings can be considered as the highlight of the Ta 152, along with the robust landing gears able to absorb the shock when landing from high-altitudes."