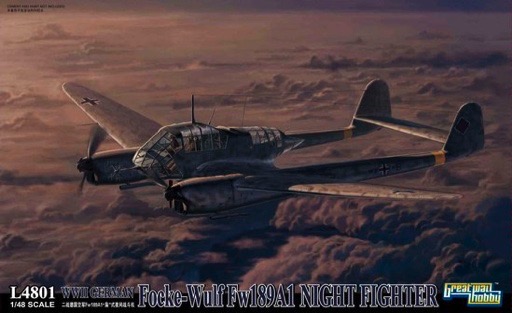 Features: The Focke-Wulf Fw 189 was a German twin-engine, twin-boom, three-seat tactical reconnaissance and army cooperation aircraft. It first flew in 1938, entered service in 1940, and was produced until mid-1944.The Fw 189 was of a twin-engine design, made up of a long-spanning wing element and twin booms. The Fw 189 system was crewed by three personnel (consisting of the pilot and two gunners who also act as observers) positioned in a cockpit sitting high above and between the engine booms featuring a nearly all-glazed greenhouse-type design. The cockpit with many pieces of massive flat glass and double tail booms provide the best views all around. One gunner operates a I dorsal machine gun mounting and the other operates a machine gun mounting in a tail cone turret assembly. Possibly the best reconnaissance aircraft to operate during World War II, the Fw189 was produced in large numbers. Total production was 864 aircraft of all variants.Fw 189 was one of the most peculiar aircraft design for the German Luftwaffe in the Second World War and accounted for a successful operational run. In 1944, some of the Fw 189 A-1 were converted to the nightfighter role. One of FuG2I2C-1 airborne interception radar was equipped on the nose and flame dampers were installed at the exhausts of the engines. MG-151/15 or MGI51/20 were equipped in dorsal position. The Fw 189 A-i night version were mainly used in East Front.