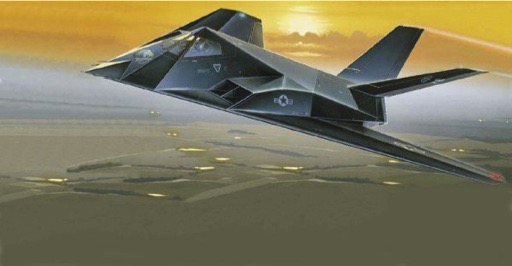 The Lockheed F-117A Nighthawk is the result of a long and very secret development program dating back to the early 1970's. Numerous attempts and tests were conducted to see if an aircraft could be designed to hide from radar observation. The Lockheed U-2 had radar absorging paint; the Lockheed SR-71 had both radar foiling shaping and radar absorbing paint. The production F-117A made its first flight on 15 October 1982 from the remote flight test facility at Groom Lake, Nevada. The aircraft is a special mission fighter bomber fully capable of performing in total darkness.