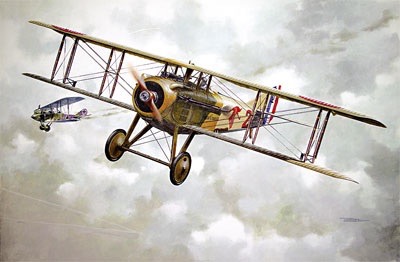 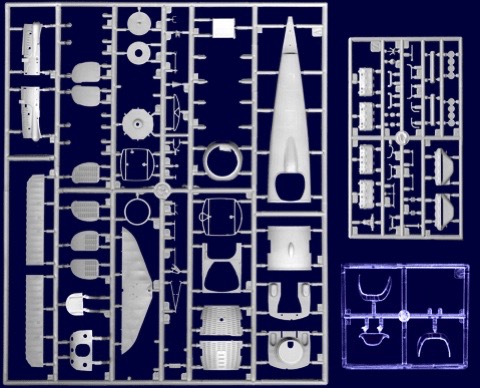 Contains markings for: The aircraft builder SPAD was founded in 1911 by Armand Deperdussin. On the eve of WWI it was bankrupted; however, the manufacturer was purchased by the celebrated pilot and designer Louis Bleriot. The first wartime products of the firm, the SPAD A.2 and SPAD A.4, were unsuccessful. Although these types were put into production, they did not find great success with the French Army.

In 1915 Germany produced the first true fighter, the Fokker Eindekker E.III, which quickly gained supremacy in the air. The Allies needed to it back as soon as possible. While the Nieuport company counted on a fighter with a conventional rotary engine, SPAD's chief designer Louis Bechereau decided to risk designing a machine around the new Hispano Suiza V8 engine designed by Swiss engineer Marc Birkigt. Bleriot convinced the military authorities of the necessity of purchasing a large quantity of these engines, and Hispano Suiza opened a branch in France. Even while he still awaited the engine and had only its scale mock-up to hand, Bechereau designed the prototype SPAD V. After the installation of the engine and its first flights the fighter impressed the military commission, and the Bleriot firm received a preliminary order for 286 planes.

During the process of being put into production the plane was visually altered a little bit, while remaining conceptually similar to the prototype. It was officially named the SPAD VII c.1 and it figures in the history of aviation as one of the best fighters of its time. Test flights lasted since April, 1916 and in August of the same year the first machines appeared at the Front. Generally the SPAD VII c.1 received superlative reviews from fighter pilots, and only the rather unreliable operation of the innovative engine detracted from its advantages. The engine builders gradually brought it to perfection which is why the SPAD VII c.1 in due course became a legend in several air forces. It was not so easy to fly or so maneuverable as the Nieuport fighters, but it had a very strong construction, a high speed, and it was forgiving of pilot errors; for a significant number of learner pilots this was an essential quality.

As more and more French squadrons re-equipped with the SPAD VII, the allies of France in the Entente became interested in this machine and soon licensed manufacture was set up in Britain and Russia, while the fighter was bought by the air forces of Italy and the American Expeditionary Forces in Europe. The Bleriot factories in France were not able to satisfy all the military orders any more, and licensed manufacture was begun at the factories of Bernard Levasser. Even the Nieuport factories produced the SPAD VII c.1.

During the process of development and operational use there were constant changes and improvements made to the fighter's design which altered its internal and external appearance in many details, but without affecting its basic advanced design. The engine capacity was enlarged, the ignition system perfected, and in several stages the reliability of the cooling system. During less than a year more than 5,000 machines were produced a huge quantity for the time. The plane took part in every important air conflict from its introduction up until the last days of the war, in spite of the appearance of its successors the SPAD XII and SPAD XIII. Although its design was rather simple, it was manifestly successful and ideal for its manufacture in the great quantity required during the war period.

In 1918 and in the immediate post-war years there took place an 'exodus' of SPAD VII's all over the world France exported these machines to Portugal, Greece, Czechoslovakia, Brazil, Estonia, Belgium, Finland, Chile, Peru, Romania, Poland, the Netherlands and even to Thailand. At least two SPAD VII's were taken on by the newly created Air Force of the Ukrainian National Republic.

Some of the most famous aces of the Great War were attached to this plane for a very long time. Glorious Georges Guynemer and his 'Vieux Charles'(Old Charles) with its stork emblem became an iconic hero of France. Rene Fonck, an ace of aces with 75 victories, said that "The introduction of the SPAD VII changed the face of aerial warfare". The Italian Francesco Baracca, the Russian Alexander Kazakov and also many other aces from many countries flew the SPAD VII c.1 and appreciated the flying qualities of this phenomenally successful plane.

By the end of the Great War the SPAD VII was no longer the principal fighter of the French Air Force any more; it had been replaced by the more modern SPAD XIII. However, for at least a decade after the end of the dramatic air combats of the skies of the Western Front, learner pilots would continue to receive their pilot certificate flying this self same SPAD VII c.1...