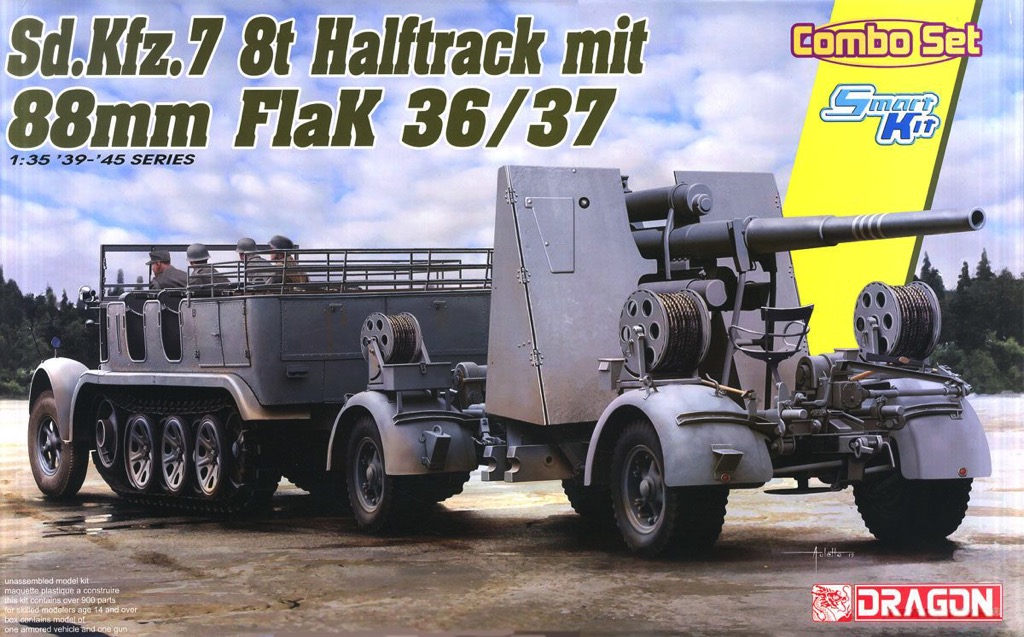 DISCONTINUED This product has been discontinued
and is no longer available.List price: $133.50
You pay: $89.99
(All prices in U.S. Dollars)

As its latest Combo Kit featuring convenient and appealing vehicle pairings, Dragon is offering a German Sd.Kfz.7 halftrack towing an 8.8cm FlaK 36/37 gun. The rather iconic Sd.Kfz.7 was originally designed to tow both the 8.8cm FlaK gun and the 15cm sFH.18 howitzer. It could accommodate up to 12 soldiers of a gun crew, as well as a limited amount of ammunition. Turning to the FlaK.37, this famous 8.8cm weapon could be used in both the antiaircraft and antitank roles.

Dragon's release of an Sd.Kfz.7 halftrack towing an s.FH.18 15cm howitzer (Item No. 6918) was very successful, prompting the offering of this natural companion - the same halftrack but this time towing the 8.8cm FlaK 36/37 gun. Of course, these items are available as separate kits, but this superb combination gives modelers everything they need in a single box and at an even more competitive price than buying them singly. Given that both the German halftrack and the gun were widely used in every theater throughout WWII, there is virtually no limit to what the imaginative modeler can do with this combination.