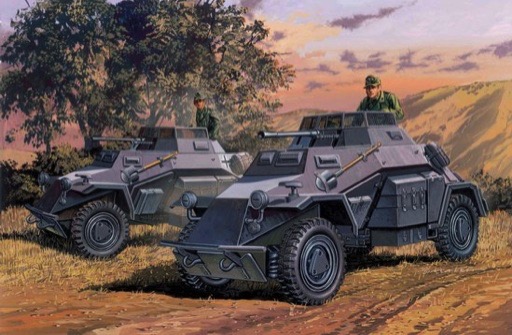 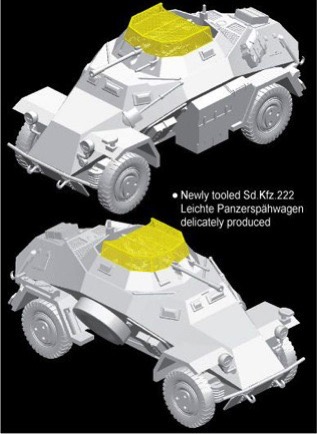 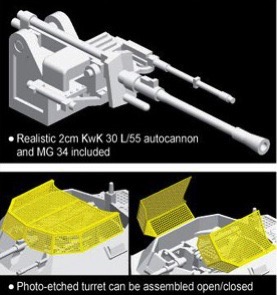 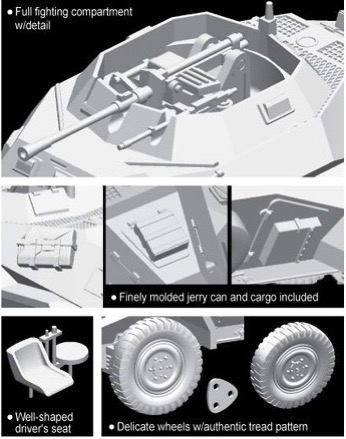 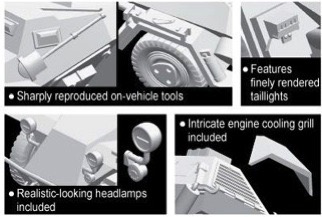 Features: To support its mobile concept of modern warfare, Germany introduced a wide range of tracked and wheeled armored vehicles. One wheeled family of vehicles introduced in 1936 included 4x4 armored cars known as the Leichter Panzerspahwagen, which translates as "Light Armoured Reconnaissance Vehicle." Powered by a Horch engine, these vehicles were based on a Horch 801 heavy car chassis to which an armored body was added. Early in WWII it performed well enough as a reconnaissance vehicle for panzer divisions, although its off-road capability let it down. The base model was the Sd.Kfz.221, but Dragon is introducing a model of the derivative known as the Sd.Kfz.222. The latter vehicle is armed with a 2cm KwK.30 L/55 cannon and MG34 machine gun in an open-top turret. Three men operated the Sd.Kfz.222. Interestingly, as well as being operated by China, a dozen Sd.Kfz.222 armored cars were also sold to China.

At the last Tokyo Hobby Show, Dragon announced a whole new series of 1/72 scale kits. The first of these is the famous little Sd.Kfz.222. As a special introductory offer, Dragon is including two complete Sd.Kfz.222 models in the box. The two vehicles are supplied with different markings. These kits make use of Dragon's highest engineering expertise, meaning the armored car is well designed and easily assembled. The mesh that covers the turret is supplied as a photo-etched part so that it remains true to scale. This little reconnaissance vehicle is the perfect vehicle to lead off Dragon's newly tooled collection of 1/72 vehicle kits!