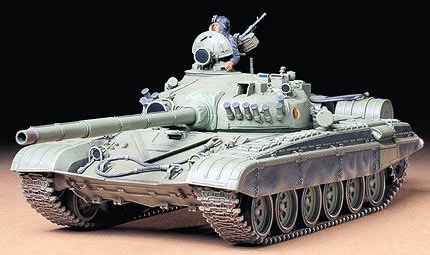 About the Russian Tank T72M1
Modern Russian tanks are well known for superb mobility and a distinctive, low silhouette, offering as small a target as possible on the battlefield. In the late 1960's, the highly sophisticated T64 tank was produced to replace the Soviets T62 main battle tank. The T64 had the advanced feature of automatic canon loading, that eliminated the requirement for a loader, reducing the crew from four men to three. The T-64 tank; however, proved to be unreliable due to its complicated mechanics, and this led to the development of the T72 tank. The T72, despite its close external resemblance to the T-64, was created in an attempt to simplify the overall design; improve its maintenance capability; and to also enhance productivity. The refined type 2A46 125mm gun with its auto-loading system is capable of firing high explosive or hollow-charge, armor-piercing ammunition. The powerplant is a type V-46, V-12 cylinder, multi-fuel engine. The standard production designated T72M1 uses reinforced frontal armor and incorporates a laser range finder. This versatile tank, which began service a the beginning of the 1970s has been in production for many years, and had been license produced in many of the Warsaw Pact countries. Even during the 1980's when a new T80 main battle tank was introduced to replace the aging T-64, the T-72 series continued to be the centerpiece of the Russian armed forces.