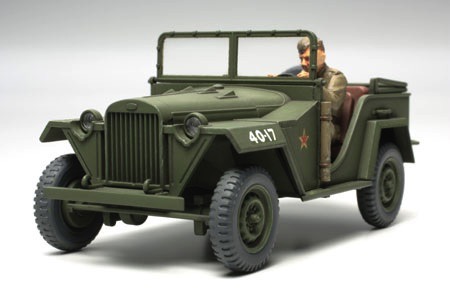 Tamiya continues to respond to the requests of the growing number of 1/48 scale modeling fans around the world with the release of the Russian GAZ-67B Field Car. With its long service history in the former Warsaw Pact countries, this kit can be used in an almost endless variety of dioramas either with other armored vehicles or with aircraft.

About the GAZ-67B
At the start of WWII, the Russian army did not have a suitable small 4X4 utility vehicle comparable to the American Jeep or German Kubelwagen. The design team at GAZ (Gorkovski Avtomobilny Zavod) was tasked to develop such a vehicle, and eventually the GAZ-67 was born in 1943. The design was heavily influenced by American Jeep models and prototypes received through Lend- Lease, but although the GAZ-67 had better rough terrain performance than the American Jeep, it's reliability was far from stellar. Nevertheless, over 90,000 GAZ-67s were produced from 1943 until well after the end of WWII, and they served with the in the armed forces of Russia as well as various other Warsaw Pact countries.