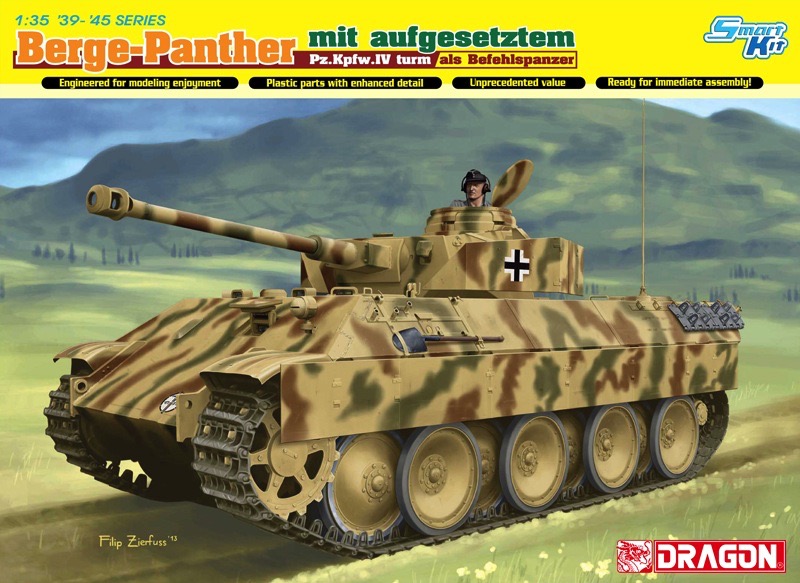 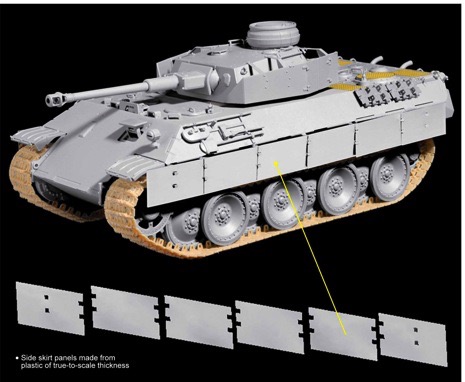 The Panther was one of the most important tanks used by Germany during WWII. It was also converted into an armored recovery vehicle known as the Bergepanther. The Bergepanther was actually transformed into one other unusual vehicle when a Panzer IV Ausf.H turret was added to an early Bergepanther hull to create a command tank. This was a conversion performed by the heavy tank destroyer battalion s.Pz.Abt.653, and the resulting vehicle was called the Bergepanther mit Aufgesetztem Pz.Kpfw.IV Turm Als Befehlpanzer. It had a fixed turret and dummy gun, with the extra space inside the turret used for radios and map boards. The vehicle was used in the Ukraine on the Eastern Front in 1944 alongside the battalion's Elefant tank destroyers.

Dragon has created a 1/35 scale kit of the phenomenally named Bergepanther mit Aufgesetztem Pz.Kpfw.IV Turm Als Befehlpanzer. As one would expect, the kit utilizes principal components from previously issued Panther and Panzer IV kits. These have extremely high standards, so the main parts come with a fine pedigree. Customers can thus look forward to an accurate, easy-to-build kit thanks to Dragon's smart engineering processes. For example, the track links are made from DS plastic for simple assembly, plus there are a number of photo-etched parts such as the engine deck grills. This unique command tank from s.Pz.Abt.653 does have a most distinctive look, so modelers can now expand their 1/35 scale Panther (or should that be Panzer IV?) families.