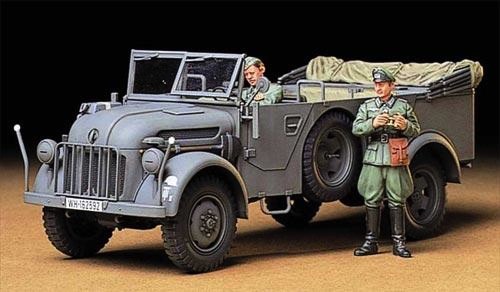 DISCONTINUED This product has been discontinued
and is no longer available.List price: $37.00
You pay: $25.29
(All prices in U.S. Dollars)

The German successes at the beginning of WWII were known as "Blitzkriegs", and demonstrated not only the effectiveness of the mechanization but also the importance of military transport vehicles. They planned to produce the military vehicles including the motorcycles under the general command for motor vehicle in 1940. It was called "Schell Programme", standardized and improved the productivity of the vehicles. For example, the types of trucks were reduced to approximately one third this time. The standardization was based on the weight of the vehicles manufactured in the market. It was divided into 5 different types: 1, 1.5, 3, 4.5 and 6.4 ton. The Steyr Type 1500 A/01 manufactured in Austria was one of the 1.5 ton types. It had a front suspension system consisting of transverse leaf springs, torsion bars and track rod, the rear suspension system with leaf springs and torsion bars that were matched to the German military vehicles. The distinctive features were the front guard and the rounded engine hood. The Steyr 3.5 liter V8 air-cooled engine produced 85 HP, sustaining the top speed of 100 km/h. The transmission was based on 4 speed forward and 1 reverse on the four-wheel-drive. There were some models which differed in the locations of the spare wheels according to the production period. It was preferred by the officers because of a variety of usage such as a staff car in line, a tow car and an ambulance.