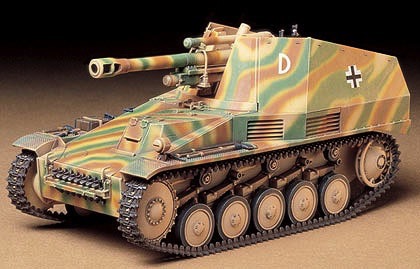 DISCONTINUED This product has been discontinued
and is no longer available.List price: $41.00
You pay: $27.99
(All prices in U.S. Dollars)

About the German Self Propelled Howitzer "Wespe"
When German Forces encountered the harsh Russian winter and superiority of Soviet tanks on the Eastern Front during WW2, they rushed to develop new equipment immediately. In addition to more powerful tanks and anti-tank weaponry, fully tracked self-propelled guns were necessary to accompany motorized troops. To fulfill this need, several prototypes were built up using existing guns and tracked chassis as interim solutions. One mounted the Type 18/2, 10.5cm L/28 light howitzer on a Panzer II chassis. The gun was the standard light field howitzer used by German artillery forces at the time, and the Panzer II had been already proven reliable with its cross-country ability. To mount the gun, the engine had to be relocated from the rear to the middle of the hull. The movable tank turret was replaced with a simple box-shaped steel structure. As its primary role was intended to be for infantry support, the fighting compartment was only lightly armored at the front and sides, and the top was left uncovered. The finished weapons system allowed the gun to elevate 42 degrees and traverse 34 degrees, and had a muzzle brake added to the gun to reduce recoil. It carried a crew of five with 32 rounds of 10.5cm howitzer ammunition. Officially named the "Wespe" (Wasp in German), its production began in February 1943, and although originally intended as a stopgap weapon, it remained in production until September 1944 with 676 produced.