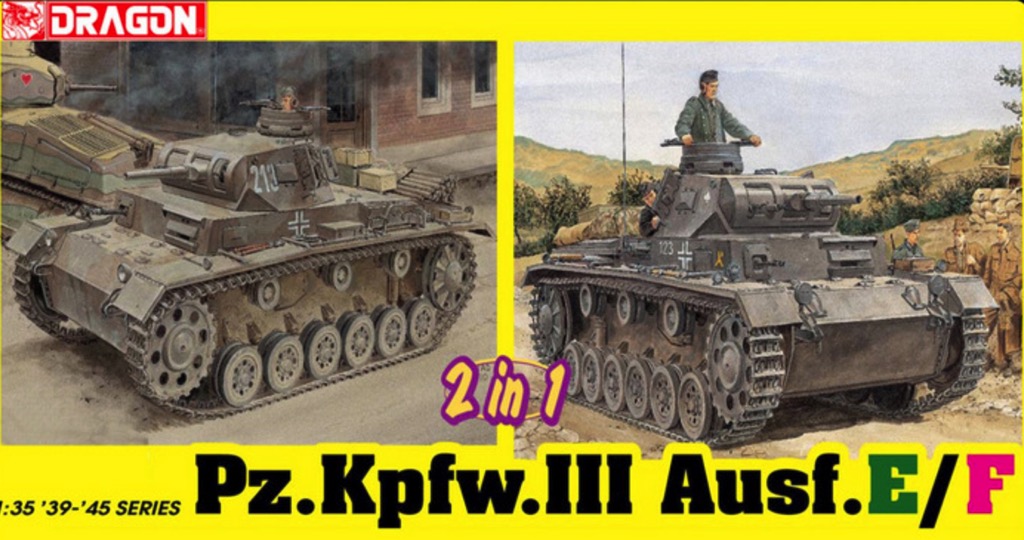 DISCONTINUED This product has been discontinued
and is no longer available.List price: $84.75
You pay: $56.99
(All prices in U.S. Dollars)

Dragon is releasing another attractive 2-in-1 kit in its 1/35 scale range, this time representing a Pz.Kpfw. III tank, a mainstay of Germany's panzer force in the early years of WWII. This new kit offering allows modelers to build either a Panzer III Ausf.E or Ausf.F variant of the tank. Particularly in the Blitzkrieg campaigns in Poland, France, the Balkans and Russia, the Panzer III was a vital asset.

There weren't many differences between the Ausf.E and F, but changes did include cast air intakes fitted on the front hull; splash guard on top of upper hull; side plates of upper hull and alternative road wheels for the two variants are all supplied in the kit's box. Thanks to the widespread application of slide molds, details are beautifully recreated with a minimum number of parts. Photo-etched components ensure absolute realism too. Both two versions now are contained within a single box for maximum modeling appeal. This set is a must-have for modelers seeking to create a diorama or scene from the Blitzkrieg era.