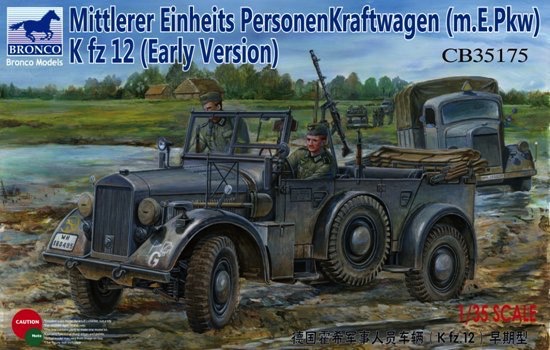 The Kfz.12 was a medium size cross country vehicle manufactured in Germany by the Horch company. It was widely used by the German army as a staff car and personnel carrier during WWII. The car was built by several companies including Auto-Union and Opel from 1937 to 1943. The Kfz 12 was a 6-seater car variant powered by a 79 bhp V-8 Horch 3.5 litre petrol engine. It had a loaded weight of 3 tons and a road range of 400 kilometers. Staff cars were often fitted with map tables in the rear passenger compartment otherwise it was the same as the standard personnel carrier. A towing hitch was standard so it could tow a 700 kg trailer or small artillery piece. Cars built before 1940 have spare wheels mounted on the sides, post 1940 had them stowed inside the body. The Einheits Pkw family proved expensive to build and maintain. It also suffered from being overweight. Thus production was canceled by 1943. Other models included the Kfz 15 radio car and Kfz 16 artillery observer car.