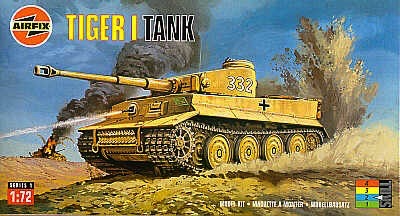 66 Pieces. First introduced into German tank units operating in Russia in 1942, the Tiger I was the most powerful tank anywhere in the world at that time and maintained its battlefield supremacy for almost all of the next three years. Heavily armoured, with thickness ranging from 1 inch to 4 inches, and carrying an 8.8 cm kwk 36/L56 cannon and two 7.92 mm machine guns, it could out-fight any other tank or anti-tank gun then available to Allied armies. Despite an all-up weight of 56 tons, the Tiger I had a maximum speed of almost 25 mph (40 km/h) and, with snorkel equipment, a wading ability of 13 feet (3.96 metres). The Tiger I equipped the special heavy tank units of both the Wehrmacht and the Waffen SS and served on all fronts. A total of 1,354 Tiger I tanks were built.