F-117A Nighthawk and HMMWV
Tamiya Models and Paints
Less than $91.20 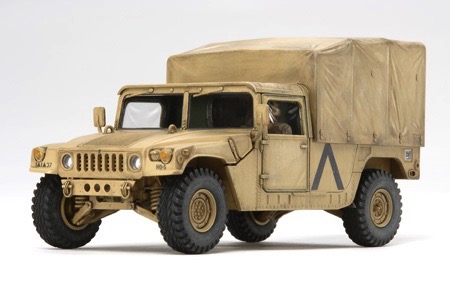 This model is the first 1/48 U.S 4x4 utility vehicle Tamiya has produced in the 1/48 scale military miniature series. Developed in the late 1970s, the US military released the U.S 4x4 utility vehicle to replace the M151 MUTT and M561 in missions. This 4x4 utility vehicle allowed the U.S military to perform various missions with one car. The vehicle was known for its off-road mobility and dependability. The U.S 4x4 vehicle was versatile because of its lightweight and exceptional performance. The aluminum body and strong steel frame allowed it to take on roles such as cargo/troop transport, ambulance, and armament carrier. The vehicle included a 4-wheel independent suspension, 4WD system, and a 150hp V8 diesel engine that allowed it to reach top speeds of 105km/h. The most popular version of this vehicle was the "Cargo Type", which included a large rear deck area to hold 1,100kg of cargo or eight infantrymen. These vehicles first were used in Panama in 1989 and since have been used in the 1991 Gulf War.