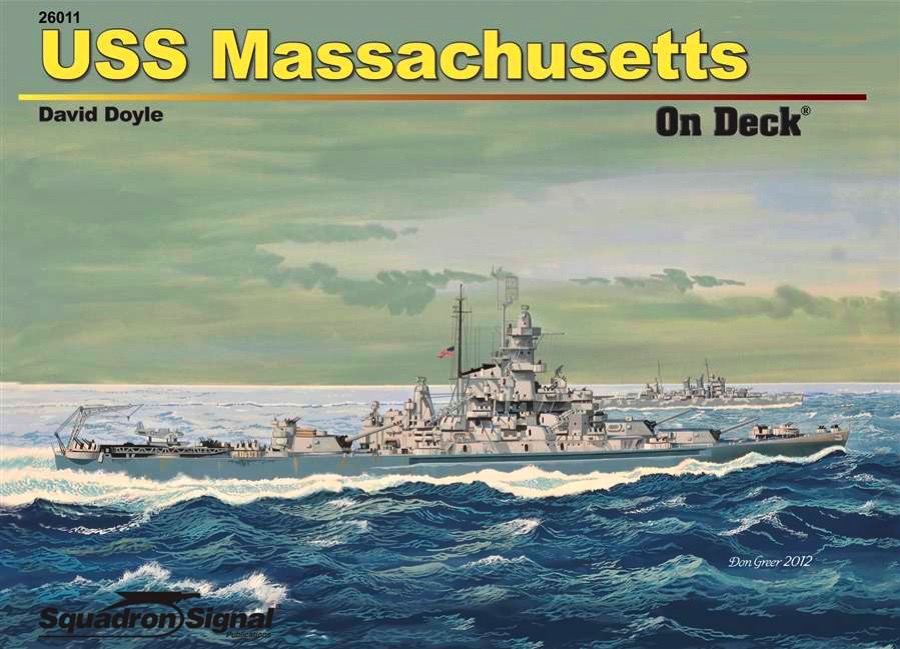 Manufacturer: Squadron Signal
Stock Number: SQU 26011
View all products of type "South Dakota Class"
Doyle. Affectionately known to her crew as 'Big Mamie,' the 35,000-ton battleship USS Massachusetts was the third South Dakota-class battleship authorized.  Launched in September 1941, at Fore River Shipyard in Quincy, Massachusetts, she was rushed to completion following Pearl Harbor and was commissioned on 12 May 1942. Armed with nine 16-inch guns, 20 five-inch guns, and numerous smaller weapons, she was one of the most formidable battleships in the world at the time. Massachusetts participated in one of the few battleship vs. battleship actions in WWII, when she fired upon the Vichy battleship Jean Bart at Casablanca. Massachusetts silenced the French warship with seven 16-inch hits. Moving to the Pacific in early 1943, her big guns shelled Japanese shore installations, while her burgeoning antiaircraft battery was employed to protect aircraft carriers. Despite earning an impressive 11 battle stars, none of her crew were killed in action. Massachusetts was laid up in the reserve from 1947. In 1962 the ship was stricken from the Navy list, seemingly destined for the scrap yard. Citizens of her namesake state and former crewmembers rallied to save the ship, raising the funds to have her preserved as a museum in Fall River.  This book documents the warship through an impressive collection of images and data tables revealing the ship the ship and how it functioned as a fighting machine as well as a home to her almost 1,800-man crew. Illustrated with 286 photographs, and color profiles; 96 pages.