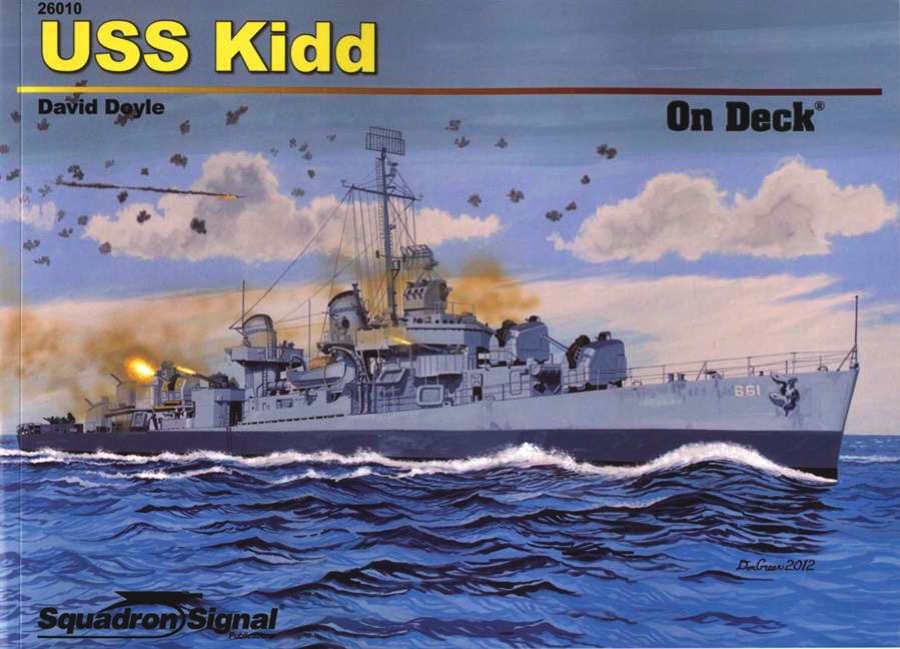 Manufacturer: Squadron Signal
Stock Number: SQU 26010
View all products of type "Fletcher Class"
Doyle. Fletcher-class destroyers were the mainstay of the US Navy's destroyer force during WWII.  With 175 of the class commissioned, the Fletchers were the most numerous of the American 'Tin Cans' - as destroyers are affectionately known. Today, only one of the type has been preserved in WWII-configuration, the USS Kidd. Named after Rear Admiral Isaac C. Kidd, who gave his life on the bridge of his flagship USS Arizona at Pearl Harbor, the destroyer USS Kidd (DD-661) conducted two years of successful operations in the Atlantic and Pacific during World War II, before being struck by a kamikaze on 11 April 1945. In that incident, the Kidd lost 38 of her crewmen killed and another 55 wounded. After repairs, the destroyer rejoined the fleet, only to be decommissioned after the war. Recommissioned and brought back to active service during the Korean War, the Kidd remained an active Naval vessel until she was decommissioned for the last time in 1964. Documented in color close-up photos are the details of the exterior of the ship, as well as her interior spaces, where destroyer sailors lived, fought, and some died, painstakingly restored and preserved today in Baton Rouge by the Louisiana Naval War Memorial Commission. Illustrated with 234 photographs; 80 pages. ISBN = 978-0-89747-670-6