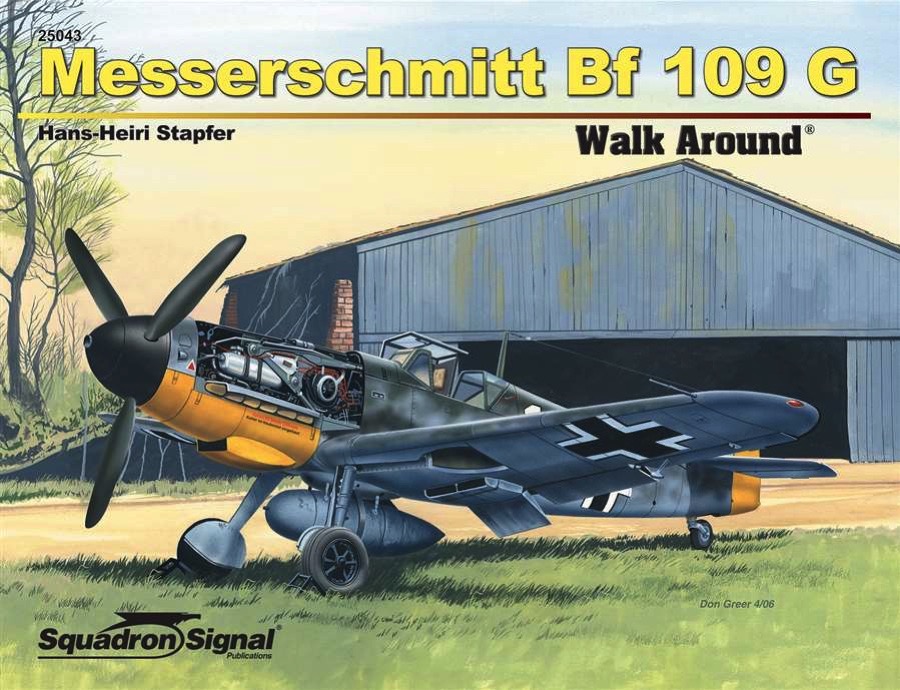 Manufacturer: Squadron Signal
Stock Number: SQU 25043
View all products of type "Me-109"
Hans-Heiri Stapfer. Commonly known as the 'Gustav' because of the G suffix in its name, The Bf 109G began rolling off assembly lines in February 1942 and remained in production until the end of World War II. The Bf 109G was mainly distinguished from its predecessor by the fact that it incorporated the Daimler Benz DB 605 A engine, a powerplant with a take off rating of 1,475 h.p. - 125 h.p. more than the DB 601E engine in the Bf 109F-4. Production of the Bf 109G was also undertaken by Germany's Allies, including Romania and Hungary. No reliable manufacturing statistics survive but it is estimated that a massive 23,000 Gustavs were built by the end of the war. Lavishly illustrated with wartime photos as well as modern museum shots, this volume recounts in detail the stories of the numerous versions of the versatile Gustav, including the G-1 and G-5 with their pressurized cabins; the prolific G-2 and G-4, which saw extensive service on the Eastern Front and in North Africa; the G-6, which was built in greater numbers than any other Gustav; the short-range reconnaissance G-8, and others. Particular attention is devoted to Gustav aircraft flown by Germany's allies during the war - wartime photos of Croatian, Finnish, Hungarian, Italian, Romanian, Slovak, and Slovenian pilots and their aircraft, highlighting a facet of the Axis war effort often overlooked by historians. Illustrated with more than 200 photographs, detailed color profiles and line drawings; 80 pages.