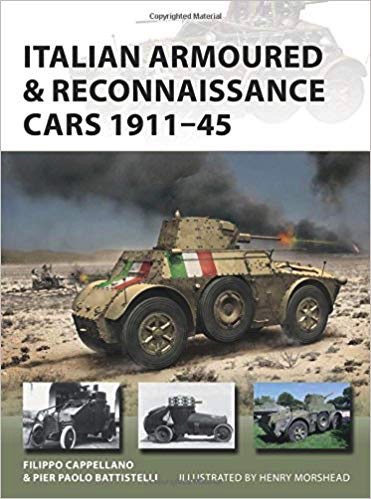 Manufacturer: Osprey Books
Stock Number: OSP NVG261
View all products of type "AB 40/1/2/3"
The first Italian armoured cars were used in the war in Libya in 1911-12 against the Ottoman Empire. With few tanks being developed, the Italians relied instead on the development of more mobile armoured cars like the Ansaldo Lancia 1 Z, during World War I, but post-war the army, focusing on the Alpine battlegrounds of Italy's northern borders, did not consider armoured cars suitable for reconnaissance duties.

The experience of the Spanish Civil War would provide the much needed last push for the Italians to develop modern armoured cars. The result were the famous AB 41-43 models, which fought against the British in North Africa and Marshall Tito's forces in Yugoslavia, along with other vehicles such as the AS 36 light armoured car.

Using detailed colour plates and contemporary photographs, this book examines the development of the Italian armoured car in the two world wars and the inter-war years, from the deserts of North Africa to the slopes of the Alps.