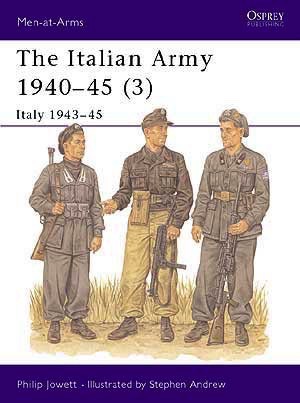 Manufacturer: Osprey Books
Stock Number: OSP MAA353
View all products of type "Armies"
Immediately after the Allied invasion of Italy in September 1943, Mussolini was deposed and the new Italian government switched sides. The German occupying forces swiftly freed Il Duce and ruthlessly disarmed the Italian Army; and from then until the end of the war in April 1945 Italian troops fought on both sides - with the forces of the new Fascist 'Salo Republic', in the Allied 'Co-Belligerent Forces', and in the Partisan movement. This period of bitter struggle saw the appearance of many new units and a wide range of interesting uniforms, described and illustrated in this final part of Philip Jowett's comprehensive three-volume series.