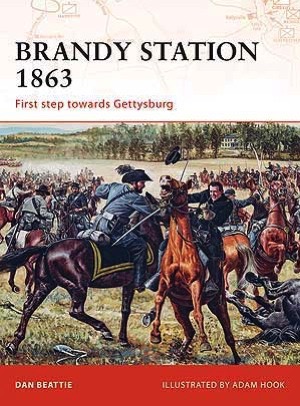 DISCONTINUED This product has been discontinued
and is no longer available.List price: $21.95
You pay: $15.89
(All prices in U.S. Dollars)

About this book
The road to Gettysburg began at Brandy Station on 9 June 1863. Early on that morning, General Pleasanton launched his men across the Rappahannock at Beverley's Ford to the north of Brandy Station and Kelly's Ford to the south. General JEB Stuart was caught unaware by these maneuvers and his lines and headquarters were nearly overrun until reinforcements helped to stabilize the situation. Following 12 hours of bitter fighting the Union forces withdrew back across the river in what was the largest and most hotly contested clash of sabres in the war. This book describes the battle with a step-by-step analysis, illustrated with detailed maps, birds-eye-views and full colour battlescene artwork.