The Rhineland 1945, Last Killing Ground in the West
96 page book. 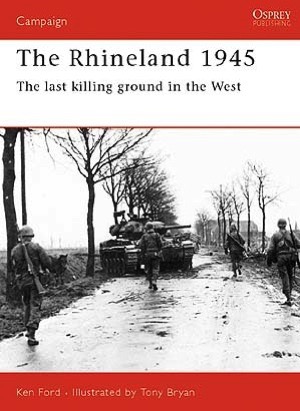 Manufacturer: Osprey Books
Stock Number: OSP CAM74
View all products of type "Clash of Armies"
View all products of type "Battles"
About this book
Known as the last great 'stand-up fight' of the Second World War the battle for the Rhineland was brutal in the extreme. Eisenhower's 'broad front' policy called for the whole of the Rhineland to be taken before pushing his troops across the Rhine and into Germany itself. The Germans opened the Roer dams in a vain bid to temper this massive Allied offensive and this called for a drastic change in tactics. The ensuing battle was characterised by amphibious assaults on the fortified villages of the flooded Rhine lowlands, frontal assaults on the much vaunted Siegfried Line and the grim fighting for the Reichswald Forest. It was to be 'the last great killing ground in the west'.

Campaigns 5, 24, 74 and 75 are also available in a single volume special edition as 'Into the Reich'.