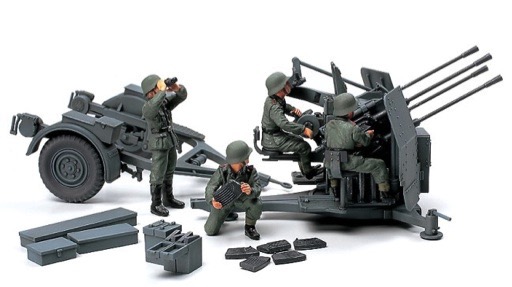 Originally developed as a light anti-aircraft weapon for the Kriegs marine, the German army also adopted the 20mm cannon for use on land and was widely-used throughout WWII. To compensate for the cannon's low rate of fire, 4 of these cannons were mounted together to create the Flakvierling 38. The mount featured collapsible seats, ammo cartridge racks, a three-legged base, and could be rotated via hand wheels, with the guns themselves fired via two foot pedals,each of which controlled a pair of diametrically opposed cannons. In basic form, the Flakvierling38 was loaded onto a 2-wheeled mount for towing to deployment points, but it was also fitted onto halftracks, tank chassis, ships, barges, and trains to provide close-range air defense against Allied fighter-bombers.