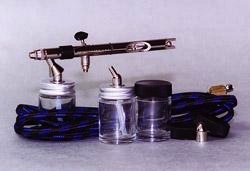 Manufacturer: Badger Air Brush
Stock Number: BAD 3607
View all products of type "Double Action"
View all products of type "Internal Mix"
The Universal Model 360 is the only airbrush capable of performing in a gravity feed as well as a bottom feed mode. Never before has one airbrush provided so much versatility. The Universal provides the user with the convenience of two airbrushes in one. With superior control at high as well as, low pressures, convenient to operate with a few drops or a full bottle of paint. The precise single needle/tip/head assembly makes replacement of multiple parts a task of the past. Single size nozzle/needle design for spraying all materials, acrylics to watercolors, inks to lacquers and all of Badger airbrush ready paints.